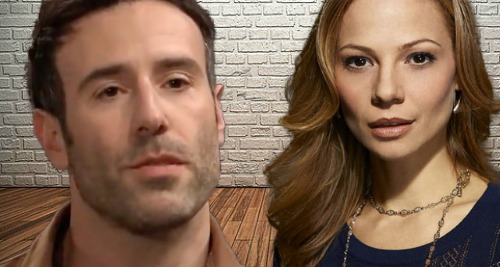 General Hospital (GH) spoilers tease that the end may arrive sooner than planned for Oscar Nero (Garren Stitt). He’s already dying of a brain tumor, but a recent reprieve lifted his spirits. Oscar thought he had a bit more time to spend with Josslyn Jacks (Eden McCoy) as well as his family and friends.

Unfortunately, this Niagara Falls road trip could bring a total catastrophe. During the week of March 4-8, Dr. Kim Nero (Tamara Braun) will get a phone call that leaves her in distress. Drew Cain (Billy Miller) will also get a startling text, which may or may not be related to Kim’s call.

Regardless, Cameron Webber (William Lipton) will find himself facing backlash and accepting responsibility. It certainly sounds like there’ll be an accident that puts Oscar’s life in imminent danger. Afterward, General Hospital spoilers say Kim will battle growing fears. Will she worry that this is it for Oscar? Will Kim realize death is just around the corner?

Alexis Davis (Nancy Lee Grahn) will offer to help someone during the week of March 4-8 as well. She’ll soon realize the clock is ticking faster than she’d hoped. That could indicate she’ll be doing some final favor for Oscar, who’s come to rely on Alexis’ legal services and support.

During the week of March 11-15, Drew and Oscar will have a heartfelt conversation. It’s possible this will serve as an emotional goodbye scene. Whether Oscar’s dying now or later, Kim should get one of those, too. General Hospital spoilers say Kim will be a mess as she copes with losing her beloved baby boy. The fact that it may happening sooner than planned should leave her even more devastated.

However, there’s somebody who will reach out to Kim and offer assistance. GH fans know Shiloh Archer (Coby Ryan McLaughlin) has some kind of vulnerable woman radar. It won’t take him long to sniff out Kim. Shiloh may offer some Dawn of Day tactics for dealing with Kim’s crushing grief, but she’ll push him away. Kim will be angry over the Oscar situation, so she’ll tell Shiloh to scram.

Of course, Kim could come around in time. If General Hospital’s going to keep Kim after Oscar’s demise, they’ll need to find another story for her. Perhaps Kim’s intense mourning could send her straight into this cult. Since Oscar found friends and happiness there, Kim could eventually view it as a final link to her son.

General Hospital spoilers suggest that Shiloh may be around for a long-term stint, so he’ll have plenty of time for other targets. Once he’s done with Kristina Corinthos-Davis (Lexi Ainsworth) and Sam McCall (Kelly Monaco), Kim may be next! It certainly looks like Shiloh will be laying the groundwork as Oscar departs this world – or at least prepares to.

Will Drew step up to save Kim from Shiloh’s manipulative strategies? GH viewers won’t want to miss the DoD shockers ahead. We’ll give you updates as other GH news comes in. Stay tuned to the ABC soap and don’t forget to check CDL often for the latest General Hospital spoilers, updates and news.