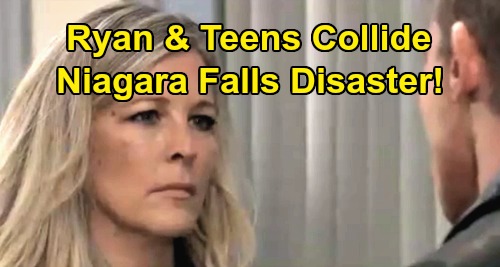 General Hospital (GH) spoilers tease that a storyline collision is on the way. There’ll be several branches that connect to Ryan Chamberlain (Jon Lindstrom), but the biggest connection might be two road trips to the same destination. Of course, we’re talking about Niagara Falls.

Cameron Webber (William Lipton) is driving Oscar Nero (Garren Stitt), Josslyn Jacks (Eden McCoy) and Trina (Sydney Mikayla) on this exciting journey. Joss even dipped into the adventure fund Jasper “Jax” Jacks (Ingo Rademacher) set up to make this happen. She wants to have some fun with her friends, but there’s already a sense of imminent doom.

As the teens headed out, Cam said he hoped they’d never make it home. Obviously, he was just joking since there’s so much drama going on his family. Cameron certainly wants everyone to make it back alive and well, but that may not happen. Is a dangerous car crash on the way?

General Hospital spoilers say Ryan will push Ava Jerome (Maura West) to elope next week. He’ll ask her to go with him to – you guessed it – Niagara Falls. It’s no coincidence that Ryan, Ava and the teens are all going to the same place. It’s also significant that an abducted Carly Corinthos (Laura Wright) will be in Ryan’s trunk! GH is undoubtedly building to a startling link between these storylines.

Could this be how Ava finally sees Ryan’s dark side? It’s easy to imagine an accident that sends the teens’ car veering into a ravine or something along those lines. It could also cause trauma to Carly, who is pregnant and will be jostling around in the trunk throughout all this.

A scenario like that would keep the teens away from Ryan and let him focus on Ava. She might be rattled and want to call for help, but Ryan would forbid it. It could lead to some shocking revelations and a dire situation for Ava as well as Carly.

Then again, the teens could end up in some situation where they’re stranded and cross paths with this killer. Could they be held somewhere and forced to escape Ryan’s wrath? Whether it starts out as accidental or intentional, it’s clear that Ryan will pose a threat to all parties involved.