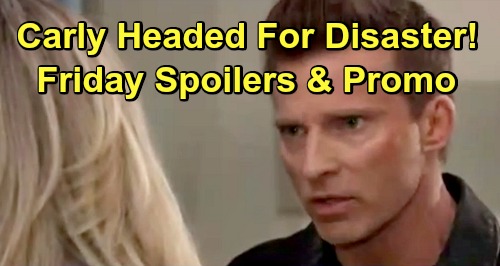 There’s a good chance there’s either been no change or Jordan’s taken a turn for the worse. We know more heartbreak’s ahead next week, so Curtis will have a lot to deal with. Meanwhile, Anna Devane (Finola Hughes) and Robert Scorpio (Tristan Rogers) will approach Peter August (Wes Ramsey). It’s time to have a meeting about Dr. Arthur Cabot (Time Winters) and how much Peter knew.

When Anna says they need to talk, Peter will wonder what this is about. Robert will note that this is about Peter’s lies. Dr. Cabot’s work eventually tied in with the memory-mapping study and the patients at that Russian clinic. Robert and Anna may suspect that Peter’s been holding out on them, but perhaps they’ve got it wrong. Peter was likely in the dark on the mystery virus and some other crucial details.

While Peter shares his side of the story, Lulu Falconeri (Emme Rylan) will recap her latest discoveries. She’s putting together all the clues she found before her attack, but she can’t quite see the full picture yet. Thankfully, Mac Scorpio (John J. York) and Felicia Scorpio (Kristina Wagner) will pitch in.

Felicia will state that there are no coincidences where Ryan Chamberlain (Jon Lindstrom) is concerned. Her conversation with Mac, Lulu and Maxie Jones (Kristen Storms) will get the wheels turning. Later, Mac and Felicia will form a startling new theory as Lucy Coe (Lynn Herrin) approaches. Lucy will be taken aback by what she hears, so they may wonder if Ryan is still alive.

However, Felicia and Mac probably won’t pick up on the twin swap just yet. Of course, Franco Baldwin (Roger Howarth) will take care of that when he staggers home and leaves a bloody trail behind him. He was just stabbed by Ryan at Ferncliff, but his escape will give him a chance to tell Liz and Drew Cain (Billy Miller) the truth.

Once Franco blurts out that the real murderer is Ryan, he’ll collapse and leave Liz frantic. She’ll hope to get Franco to GH for treatment right away. Across town, Ava Jerome (Maura West) will lash out at “Dr. Kevin Collins.” She’ll explode when she learns “Kevin” went to visit Kiki Jerome’s (Hayley Erin) without telling her.

Naturally, Ryan will spin this to make himself look like a caring fiancé. He might suggest he didn’t want to cause additional pain by sharing his plans. Ryan could argue that he had to confront Franco for Ava’s sake. He could act outraged about Franco’s admission regarding Kiki and gain favor once again.

Ava will indeed settle down and agree to elope soon enough. Big trouble’s brewing thanks to that shocking decision. Until then, we’ll see Carly Corinthos (Maura West) get a lecture at GH. Jason Morgan (Steve Burton) will contend that finding out isn’t worth putting Carly and the baby at risk. This may involve Carly’s lingering questions about “Wilson Ritter,” the mysterious Ferncliff patient.

Then again, this could involve missing Laura Webber (Genie Francis). Whatever the case, General Hospital spoilers say Jason will deliver a stern warning. He’ll want Carly to back off and take it easy, but curiosity will get the best of her. After she digs too deep, Carly will find herself in Ryan’s trunk next week!