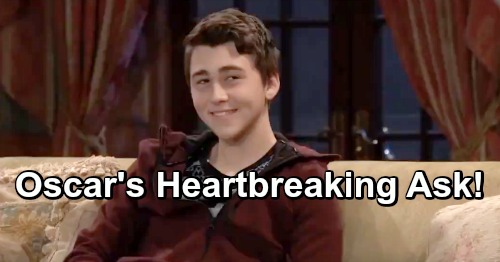 General Hospital (GH) spoilers tease that Oscar Nero (Garren Stitt) will have some big requests in the coming days. As the brave teen prepares for the end of his life, he’ll have some specific tasks for the various people he knows. For example, he asked Ned Quartermaine (Wally Kurth) and Olivia Quartermaine (Lisa LoCicero) to handle his wishes for his funeral. He didn’t want his mom and dad burdened with the requests when they are clearly suffering right now.

According to General Hospital spoilers, Oscar will have more requests for his friends and family. He’ll have a private chat with Jason Morgan (Steve Burton) about carrying out some of his wishes, and he’ll probably work with Alexis Davis (Nancy Lee Grahn) to get his will squared away.

But probably the hardest task that Oscar will have is to help Josslyn Jacks (Eden McCoy) through his death and to help her deal with her new normal after he’s gone. It’s been clear in previous GH episodes that Oscar has noticed the spark between Josslyn and Cameron Webber (William Lipton). Of course, Josslyn and Cameron don’t act on their feelings, but Oscar can see that they have a great relationship.

Oscar can probably also sense that Cameron has feelings for Josslyn, and if Oscar weren’t in the picture, he knows that Cameron would probably pursue her. General Hospital spoilers indicate that Oscar will have a big task for Cameron, and chances are that it will involve taking care of Josslyn.

Of course, it will be a difficult conversation for Cameron to have with Oscar. Oscar seems to be resigned that he’s dying, and he has been very calm and mature about his dying requests for others. But the conversation will probably be very uncomfortable for Cameron, who really doesn’t want to lose his friend. And as a teenager, he’s not completely in touch with his feelings, so it will be tough.

But it will be a conversation that they really need to have, and soon, so Oscar will forge ahead with it. We’ll see how Cameron reacts, but we bet that the two will have a good heart-to-heart where Cameron promises to follow through for his best friend.

Are you looking forward to watching Oscar and Cameron’s heart-to-heart about Josslyn? Stay tuned to the ABC soap and don’t forget to check CDL often for the latest General Hospital spoilers, updates, and news.