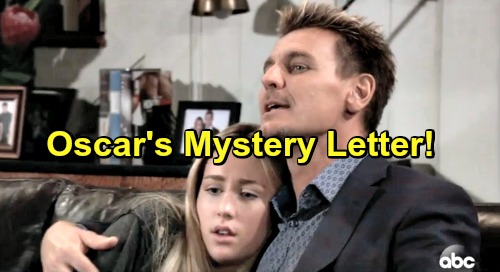 General Hospital (GH) spoilers tease that Josslyn Jacks (Eden McCoy) will slowly try to heal. Her heart is broken right now, and it’ll break even more once she says a more final goodbye. Joss knows she’ll always carry a part of Oscar Nero (Garren Stitt) with her, but it’s not the same. She still feels like Oscar should be by her side, so that’s making it tough to let go.

Jasper “Jax” Jacks (Ingo Rademacher) delivered some sweet support on Wednesday’s GH episode, May 8, and will continue to do so. Carly Corinthos (Laura Wright) will be there for Josslyn as well, so it’s great that she’s got both parents to lean on. Even so, Oscar’s memorial service will be a difficult ordeal for Joss. It’ll make this loss real and drive home the point that Oscar’s gone forever.

That’ll be good in some ways since Josslyn will get closure and can start picking up the pieces of her shattered life. Josslyn will also watch that special video message, which will offer one last glimpse at Oscar. It’ll be something she can cling to if the grief becomes too much to bear. However, Oscar just might have one more surprise in store for Josslyn – one that could be revealed at the Nurses Ball.

General Hospital spoilers hint that Joss’ performance may move ahead as planned. It’s possible she’ll get Cameron Webber (William Lipton) or even Jax to help her out with that. Then again, Josslyn might fly solo on this one. She might feel like she has something to prove, which could lead to Joss doing this on her own.

Regardless, it’s reasonable to assume Josslyn will fall apart before the big moment arrives. This Nurses Ball performance was an unattainable goal for Joss and Oscar. They knew he wouldn’t make it, but they focused on getting a song ready for it anyway. It gave them hope, so Oscar may plan to give Josslyn another dose of it just before she goes on stage.

On May 21, GH fans can expect Josslyn to receive a sweet letter. General Hospital spoilers say it’ll be a note from someone special, and there’s no one more special to her than Oscar was. He was also the sweetest teen around, so he’s certainly a contender as the note writer.

After all, Oscar thought of everything else. He had time to prepare for his passing, which is why he got Ned Quartermaine’s (Wally Kurth) help finishing the song. Oscar also recorded the video message for his memorial activities, so he covered all his bases. He may have known Josslyn would struggle to find her Nurses Ball courage. Oscar is definitely the kind of guy who would leave behind a note to inspire Joss.

Regardless, Josslyn will indeed get what she needs from this letter. Whether it’s from deceased beau or someone else, Joss will find a way to be brave for Oscar’s sake. Will this note be Oscar’s final gift to Josslyn? We’ll give you updates as other GH news comes in. Stay tuned to the ABC soap and don’t forget to check CDL often for the latest General Hospital spoilers, updates and news.