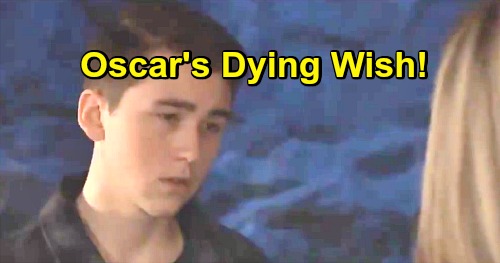 General Hospital (GH) spoilers tease that Oscar Nero (Garren Stitt) and Josslyn Jacks (Eden McCoy) will do their best to squeeze in as much life and fun as they can during the time that Oscar has left. The two teens are determined to spend as much time together as they can, and they’ve got various adventures lined up, so that Oscar can experience as much as possible in his short life.

That’s a great goal, but pretty soon reality is going to set in, and Oscar and Josslyn will realize that they’ll soon be parted by death. It’s easy for them to get into a mindset of wanting to live for today, but at some point, Oscar will start to think about how life is going to go on without him.

And that means that Josslyn is going to move on with her life after Oscar has died. Out of love, Oscar may want to prepare Josslyn for moving on without him. Although they’re only teenagers, Oscar may feel compelled to make sure that Josslyn doesn’t spend too much time grieving after he’s gone, and that she moves on in a healthy way.

That’s where Cameron Webber (William Lipton) may come in. Cameron and Josslyn have been friends since they were little kids, and Oscar can see that they have a strong connection. Oscar may decide that he wants Cameron to take care of Josslyn after he’s gone.

It would be a natural feeling for Oscar to want to make sure that Jossyn’s ok going forward, and he might figure that Cameron is the person in the best position to look out for her. Oscar might even give Cameron and Josslyn his outright blessing to date in the coming months and years.

Do you think that Oscar will want Cameron and Josslyn to get together after he’s gone? Do you think that will be Oscar’s dying wish? Stay tuned to the ABC soap and don’t forget to check CDL often for the latest General Hospital spoilers, updates, and news.