General Hospital Spoilers: Oscar’s With Joss On Borrowed Time – Collapse Means The End Is Near? 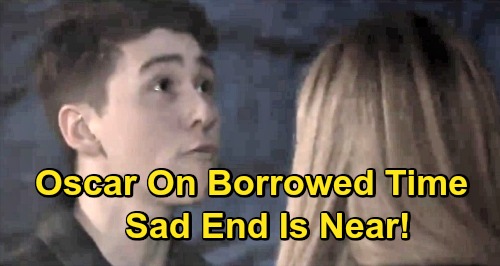 General Hospital (GH) spoilers tease that Oscar Nero (Garren Stitt) may have less time left than he previously thought. After the clinical trial failed to shrink Oscar’s tumor, he and Josslyn Jacks (Eden McCoy) decided to stop fighting the inevitable and simply enjoy the time they had left together. They’ve decided to plan some little adventures around Port Charles and just love each other as much as they can.

But the teens aren’t expecting their time to be too limited. When Oscar talked with his oncologist Dr. Terry Randolph (Cassandra James), she indicated that other patients with disease similar to Oscar’s have a life expectancy of anywhere from six weeks to six months. Of course, Oscar is hoping for the six-month end of the range, but recent events suggest that his time could be more limited.

Oscar and Joss’s first adventure was in the catacombs. They went searching for an entrance to the catacombs in an old building that they had heard the seniors talking about. But while they were there, Oscar suddenly collapsed and had a seizure, absolutely terrifying Joss. It looks like Oscar will recover from the seizure, but what does the fact that he had a seizure mean?

Well, it could mean that his malignant brain tumor is growing, and invading parts of his brain that control motor function. That would be bad news for Oscar and his family, as it would mean that the disease is progressing rapidly.

It would also mean that Oscar and Joss may not have much time left while Oscar is mobile and able to come and go as he pleases without medical supervision. Soon, Oscar may need to be hospitalized, especially if it turns out that he’s at great risk for more (and more violent) seizures.

It’s truly heartbreaking to think of Oscar and Joss losing their ability to check off their “things to do” on their calendar due to Oscar’s condition deteriorating sooner rather than later. Joss just wants to make Oscar’s final weeks or months enjoyable, and it would seem cruel if they were to lose even a couple weeks of time together.

Do you think Oscar’s collapse indicates that the end is near? Stay tuned to the ABC soap and don’t forget to check CDL often for the latest General Hospital spoilers, updates, and news.