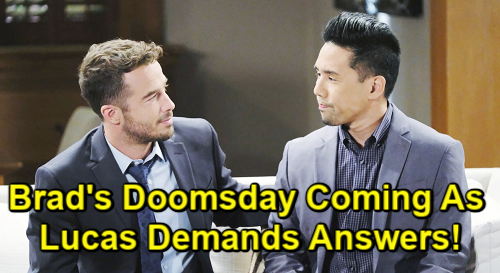 General Hospital (GH) spoilers reveal that Lucas Jones’ (Ryan Carnes) suspicions will grow stronger. You’d think it would be a good thing to finally have Shiloh Archer (Coby Ryan McLaughlin) out of the picture. A major threat has been eliminated for Brad Cooper (Parry Shen), but Shiloh’s death may be part of why his secret explodes.

Part of Lucas will always have to worry about Brad’s dark side returning. Although Lucas told Brad he’s not the man he used to be, GH fans know that’s not really true. Brad’s scheming just as hard as ever, and a little piece of Lucas has to suspect it. He can tell something’s off about Brad’s behavior, so he won’t be able to ignore his hunch.

Lucas Jones Fixated On The Flowers And Where They Came From

In an interview with Soap Opera Digest, Parry Shen talked about the pressure Brad’s under and what it’s building to. Brad will admit to Julian Jerome (William deVry) that he believes Nelle sent the flowers. It’ll be one more reason why Brad spins out. “Brad is troubled because anything that’s a mystery or a loose end AND raises suspicions with Lucas is hardly ever good news,” Shen said.

General Hospital spoilers say Lucas will be fixated on these flowers and where they came from. Later, Brad will cause more issues when he wants to bail on their therapy session with Dr. Neil Byrne (Joe Flanigan). He’ll have a string of excuses for why they should reschedule, so it won’t take long for Lucas to see that Brad’s nervous.

“Lucas is definitely picking up on increasingly questionable behavior from Brad,” Shen admitted. “With the threat of Shiloh now gone, he is confused as to why Brad’s paranoid behavior is still continuing.” As Lucas gets closer to the truth, Brad’s worries are only going to get worse. This pressure he’s facing could explode eventually.

Will Brad Cooper Accident Blurt Out The Baby Swap Shocker?

What happens if Brad ultimately blurts out the baby swap shocker? Could Lucas reluctantly join the secret circle? He’d certainly be torn since he adores “Wiley Cooper-Jones” (Erik and Theo Olson), but he’d hate knowing he robbed Michael Corinthos (Chad Duell) of a son.

Of course, it’d be better if GH leaves Lucas out of the loop and makes him a total victim. We’ll all feel sorrier for him if his hands are kept completely clean! Whatever the case, General Hospital spoilers say some great stuff’s coming up as the big reveal draws near.

WATCH: Julian puts the fear of God in Brad while Curtis encourages Lucas to fight for his relationship. #GH pic.twitter.com/zMgYxM8iT2