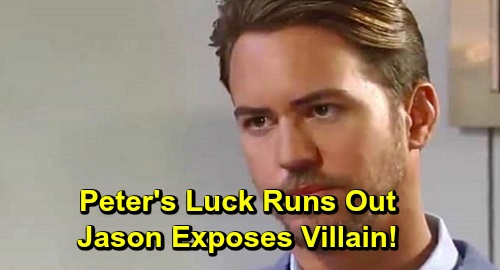 General Hospital (GH) spoilers tease that Peter August (Wes Ramsey) can only get by with his sinister secrets for so long. In the process of trying to keep his shady activities under wraps, Peter has carried out even more shady activities. The hole he’s digging for himself just keeps getting bigger and bigger. Is exposure imminent for Peter? Who might be the one to reveal Peter’s true colors?

For starters, we should note that GH seems to be passing up an opportunity. What was the point in turning Franco Baldwin (Roger Howarth) into pre-2012 Drew Cain (Billy Miller) if he wasn’t going to expose Peter’s larger role in the brain-mapping procedure? The whole Drew existence should’ve been about revealing the people behind the original switch.

If Franco comes back as himself with none of Drew’s memories, there’s no hope of accessing this information. General Hospital spoilers hint that Franco will be Franco again, so this story feels like a waste. It could’ve been used as a great strategy to drop some Peter bombs, but General Hospital appears to have another plan in mind.

Of course, it’s possible there’ll be some Drew memory remnants for Franco, but the show probably intends to drag this out. Peter should be able to keep his secrets for now, which opens the door for someone else to expose him. Luckily, there are several other Port Charles residents with growing suspicions.

Peter claims to have been at GH to do a story on Franco’s procedure. Why would Peter be allowed into the operating room when Franco’s procedure was being done? Even Maxie Jones (Kirsten Storms) thought it was odd that Peter was at the hospital instead of moving into her apartment.

Will Maxie question Peter about the ordeal? Will anyone find the phone and silencer in the trash? The pressure could rise for Peter, who clearly doesn’t do well under it! Peter’s to blame for Andre Maddox’s (Anthony Montgomery) stabbing as well as Drew’s plane crash. He also ordered this latest hit, which put Andre’s life at stake once again along with Franco’s. How many more lucky breaks can Peter get?!

Jason Morgan (Steve Burton) has been suspicious of Peter for quite some time. He knows Peter was behind his stint at the Russian clinic and that Peter wanted him to kill Caesar Faison (Anders Hove). Jason also knows Peter contacted Shiloh Archer (Coby Ryan McLaughlin) in prison and could be connected to the brain-mapping with Shiloh and Franco.

Will Jason figure out Peter is responsible for Drew’s presumed death and this attempted hit on Andre? Peter’s time is running out, and Jason won’t let a connection to Anna Devane (Finola Hughes) or Robin Scorpio-Drake (Kimberly McCullough) stop him from taking Peter down. Peter has targeted Sam McCall (Kelly Monaco) – and that’s a deal-breaker!

Sam is in prison and separated from her family because of Peter, so Jason will want Peter to pay once he has solid proof. When the truth comes out, Peter will lose Maxie and alienate Anna. He’ll be forced to answer for his deadly behavior, so let’s hope Jason’s the one to sink him. In the end, Peter will prove he’s indeed his father’s son and that will be his downfall.