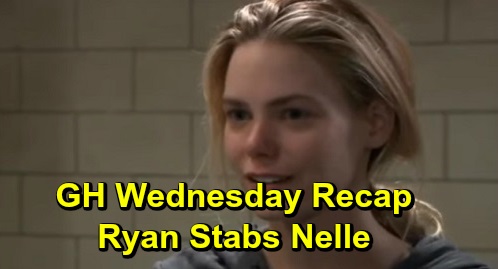 General Hospital (GH) spoilers recap for Wednesday, December 11, reveal that Ned Quartermaine (Wally Kurth) cornered Brook Lynn Ashton (Amanda Setton) for firing her mother as her manager and leaving her record company and her new record producer. Ned then looked at the contract that Brook Lynn signed – it was a 5-year contract signed without a lawyer. That led Ned to compare Brook Lynn to AJ Quartermaine (Sean Kanan), which irritated her, and she stormed out.

Meanwhile, Willow Tait (Katelyn MacMullen) received a visit from Lorraine “Harmony” Miller (Inga Cadranel), who had been given early parole due to prison overcrowding. The two attempted not to rehash the past with Shiloh Archer (Coby Ryan McLaughlin), but Willow wanted to know why her mother was still using the name “Harmony.” Harmony pointed out that she did a lot of good things for the community under that name and decided to keep using it.

Willow shared that Wiley Cooper Jones’ (Theo and Erik Olson) fathers were in a car accident, and Harmony had a lot of questions, including whether she could ever meet her grandson. Willow pointed out that Wiley had his own family now, but she did show Harmony a picture of Wiley, which meant a lot to her. The two ended their visit on good terms.

Over at GH, Julian Jerome (William deVry) got a pep talk from Alexis Davis (Nancy Lee Grahn), and she got an update from him on the cause of Brad Cooper (Parry Shen) and Lucas Jones’ (Ryan Carnes) car wreck. Alexis assured a guilty Julian that forensics were good, and that they’d find out what happened. Elsewhere in GH, Olivia Quartermaine (Lisa LoCicero) and Lulu Spencer (Emme Rylan) spoke briefly about Dante Falconeri (Dominick Zamprogna) and Olivia shared about how Dante had returned her letters unread.

At the Corinthos house, Sonny Corinthos (Maurice Benard) remained in denial about the seriousness of Mike Corbin’s (Max Gail) condition. He told Carly about how he wanted Mike to be treated by a Swedish doctor in advance of the clinical trial. Josslyn Jacks (Eden McCoy) then came in an announced that she was going to see Mike, and Carly asked her to wait until the morning, which Sonny couldn’t understand.

Carly explained that Mike gets worse at night, and Sonny was clearly peeved, yelling at Carly later that he wasn’t going to give up hope, nor sit around and watch his father die. Later, at Josslyn’s request, Michael Corinthos (Chad Duell) approached Sonny to talk with him about his stance on Mike. Just then, Sonny received a call from the Swedish doctor.

Next, Nelle Benson (Chloe Lanier) met with Martin Grey (Michael E. Knight) and fumed at him about wanting to get out of prison…now. Martin argued that her next parole hearing was 16 months away. They went back and forth for a while, until Martin mentioned that “it’s not like your life is in danger here,” which gave Nelle an idea, and she then went to visit with Ryan Chamberlain (Jon Lindstrom), who was in the prison infirmary for an infection.

Nelle and Ryan caught up a little, and Nelle asked Ryan for a favor, which occurred off-screen. Ryan wondered what was in it for him, and Nelle promised to get him photos of Ava Jerome (Maura West) once she was on the outside – to be his link to the woman he loves and to Port Charles in general. Ryan then noted that Nelle’s plan had merit, but that it needed a few modifications.

Finally, Chase arrived at Pentonville on police business, then happened to hear a horrible scream from a nearby room. He burst in the room, gun drawn, and found Nelle on the floor, stabbed with Ryan standing over her holding a bloody scalpel.