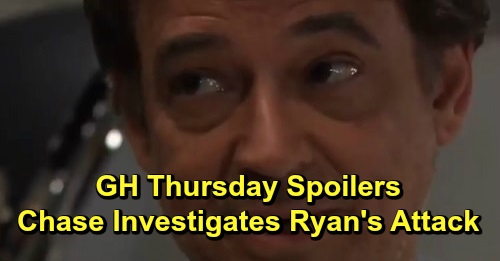 General Hospital (GH) spoilers for Thursday, December 12, tease that Brad Cooper (Parry Shen) will get a visit from Willow Tait (Katelyn MacMullen). She’ll stop by GH and let Brad know she’s there for him. Brad will wish he could take back everything that landed them in the car that night. His statement will leave Willow looking curious, but Brad will likely cover with vague excuses about being the reason for his conflict with Lucas Jones (Ryan Carnes).

Meanwhile, Michael Corinthos (Chad Duell) will have a question for Sonny Corinthos (Maurice Benard). He’ll wonder if Sonny’s ever asked himself if hanging on is what Grandpa would’ve wanted. Sonny may realize Mike Corbin (Max Gail) would rather see him let go and just enjoy the time they have left. It won’t be easy, but Sonny will definitely appreciate having Michael to confide in.

Michael will have to lean on someone as well this Thursday. He’ll accept some much-needed help, so maybe Willow will visit again to pitch in with “Wiley Cooper-Jones” (Erik and Theo Olson). There’s a good chance GH will provide more opportunities for Willow and Michael to bond in the coming weeks. That way they’ll be even more connected when the baby swap shocker finally explodes.

In the meantime, Josslyn Jacks (Eden McCoy) and Dev Cerci (Ashton Arbab) will do some bonding, too. At Turning Woods, Mike will have another rough day where he doesn’t recognize Joss or understand what’s going on. He’ll ask the “kids” if they’re there to break him out, so Josslyn should see why Carly Corinthos (Laura Wright) was so concerned about her upcoming visit.

Fortunately, Dev will be right by Josslyn’s side as she deals with Mike’s decline. Whether Mike has a flash of recognition before Joss leaves or not, perhaps Dev can help Josslyn turn this into a pleasant conversation. Sometimes that’s all you can hope for when a loved one’s in this stage of Alzheimer’s.

Other General Hospital spoilers say Jason Morgan (Steve Burton) will head over to the Quartermaine mansion. He’ll find Ned Quartermaine (Wally Kurth) and ask if there’s been any news about Sam McCall’s (Kelly Monaco) parole. Thursday’s GH preview video also shows Sam in the visiting area saying, “What other choice do I have?” It certainly sounds like things won’t be going well for her in this episode.

As for Nelle Benson (Chloe Lanier), she’ll think things are going perfectly. Nelle approached Ryan Chamberlain (Jon Lindstrom) with a plan to secure her freedom, so Ryan suggested a few modifications before they put it in motion. By the end of Wednesday’s episode, Ryan was standing over injured Nelle with a bloody scalpel.

On Thursday, Ryan will tell Harrison Chase (Josh Swickard) this isn’t what it looks like. That’s true, but he won’t really want Chase to buy his story! Nelle has promised to provide pictures of Ava Jerome (Maura West) and serve as Ryan’s link to Port Charles, so he needs Chase to believe she’s in real danger. It could be Nelle’s best shot at scoring an early release. Chase will investigate this “attack” and try to figure out what exactly went down, so we’ll see if Nelle and Ryan’s plan pays off.