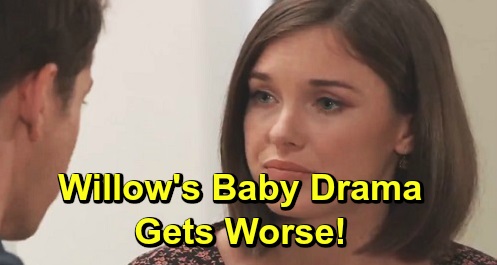 General Hospital (GH) spoilers tease that Willow Tait (Katelyn MacMullen) has plenty of bombshells in her future. In the episode airing December 11, Harmony Miller (Inga Cadranel) is back on the scene. GH could’ve chosen to just leave Harmony locked up and let everyone forget about her. Why do they want to insert Harmony into the story again? Let’s dig a little deeper here and hopefully figure that out.

Although General Hospital’s been focusing on other secrets and shockers for a while, the truth about Nina Reeves’ (Cynthia Watros) biological child still has to come out. We can’t forget about that heart pendant that someone out there surely must have the other half of.

Although GH drops stories from time to time, it doesn’t make sense for them to drop this one. That’s especially true when they’ve seemingly worked hard to set it all up. There’s never been a good reason for Nina and Willow’s feud unless GH writers were going somewhere with it. It still seems likely that Willow is Nina’s bio daughter, so they may be forced to work through all this conflict down the road.

Harmony’s reappearance feels a bit random unless there’s a point to it. The point may be to prepare for the eventual big reveal that she’s not Willow’s true mother. Willow was probably stolen from Nina, but blood alone isn’t enough to help them bond. After all, they’ve spent most of their airtime together lashing out at each other. Nina and Willow may need something in common that they can bond over.

Of course, Willow is poised for some heartbreak eventually. “Wiley Cooper-Jones” (Erik and Theo Olson) is actually Michael Corinthos (Chad Duell) and Nelle Benson’s (Chloe Lanier) child. The baby Willow gave birth to is dead, so that’ll be tough for her to deal with. We also have to wonder where all this kid talk with Willow and Harrison Chase (Josh Swickard) is heading. Could that set up another difficult blow?

Willow admitted she might be ready to be a mother sooner than she thought, but she acknowledged that she didn’t want to have a baby just to fill the “Wiley” void. Still, the fact that Willow’s now longing for a child could be a hint. Will her heartache over the Wiley revelation make her want a baby with Chase ASAP? What happens if Willow learns something’s wrong and she can’t have more kids?

That’s a reasonable possibility based on all the recent kid developments with Chase and Willow. There’s been so much talk about how they want to be parents someday, so it’d be interesting if Willow found out she couldn’t have another child.

General Hospital would inevitably give Willow a miracle baby at some point, but Willow’s potential issues could give her a reason to bond with Nina – who’s spent years longing for a child of her own. That might be a way to bring these characters together after Willow’s most likely revealed as Nina’s bio daughter.