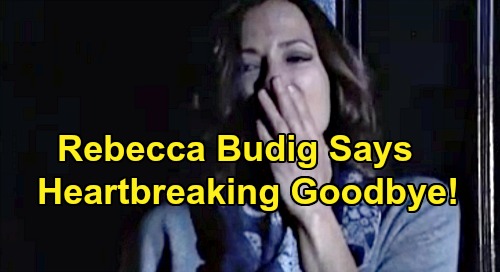 General Hospital (GH) spoilers reveal that Rebecca Budig (Hayden Barnes) recently spoke out about her exit from the ABC soap. One thing most viewers can agree on is how devastating it was! No matter how you feel about Hayden and her choices, it was painful to see her say goodbye to her daughter. Violet Barnes (Jophielle Love) didn’t know it farewell for more than a night, but fans were given some closure.

Of course, Hayden had an emotional moment in private as she left Violet with her father, Hamilton Finn (Michael Easton). It’s such a shame to see this chance at a “Fayden” family slip away! Budig and Easton really have that special something that just works. Their chemistry is fantastic, and little Violet is just adorable. It’s easy to see why Budig found it so difficult to leave behind her scene partners – as she mentioned in her exit post on Instagram.

“It’s hard to say goodbye once..and twice is that much harder,” Budig admitted. “Then add the beautiful, sweet, magical @jophiellelove and it’s heartbreaking. I want to thank all those @generalhospitalabc fans that show up everyday and are passionate about this show and our characters. I will miss my friend..for those like him are hard to come by..but I know our paths will cross again. (Or at least one can hope :) xo”

On Facebook, Michael Easton also had a special message for Budig. He’s got a close working relationship with her, this exit was certainly something he was dreading. Easton said, “I HATE GOODBYES…I know you do too. Maybe we’re lucky to even have something that makes saying goodbye so hard.”

Easton went on to say that perhaps he shouldn’t be sad because it’s over. He suggested he should be happy that it happened – although it’s challenging when he’s already missing his friend. Easton had plenty of praise for Budig’s incredible work and insisted this was also a “thank you.”

“Thank you for being so damn good at what you do,” Easton said. “For lighting up a stage. Finding truth in the words. For making me better at what I do.” Easton added that maybe there’s no such thing as goodbye for them and offered General Hospital watchers a little hope for the future. He argued that “maybe this is not forever” or the end of the road. Easton intends to hold onto the memories until they meet again.

After that message was reposted by a fan on Twitter, Budig gave Easton loads of praise in return. She feels lucky to call Easton a friend and grateful to the fans who’ve supported them. Budig also couldn’t rule out a return to General Hospital one day. “And I always say…never say never,” Budig said.

It’s hard to say goodbye once..and twice is that much harder. Then add the beautiful, sweet, magical @jophiellelove and it’s heartbreaking. I want to thank all those @generalhospitalabc fans that show up everyday and are passionate about this show and our characters. I will miss my friend..for those like him are hard to come by..but I know our paths will cross again. (Or at least one can hope :) xo

Sigh. I’m so lucky to call him my friend. To have worked with him..and learned so much from him. You are only as good as your partner so..thank you to all the fans who have supported me, Hayden and Finn…And I always say..never say never. ❤️ https://t.co/vNAyKJZHQG