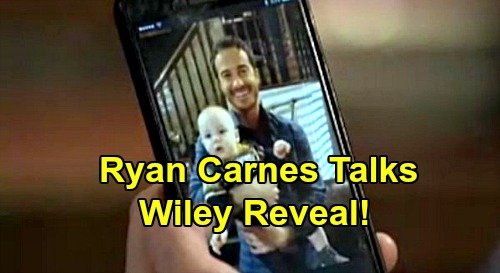 General Hospital (GH) spoilers reveal that the “Wiley Cooper-Jones” (Erik and Theo Olson) secret still has to explode. Out of all the stories on GH right now, it seems like this is the one fans most want to see wrapped up. Baby swap plots always take a while to play out, but we’d say they’ve milked the drama long enough.

Of course, General Hospital writers don’t seem ready to unleash the “’Wiley’ is Jonah Corinthos” chaos just yet. That means we’ll just have to be patient, but we can consider what’s to come in the meantime. In a recent issue of Soap Opera Digest, Ryan Carnes (Lucas Jones) made some predictions about the fallout and shared why he’ll be jealous of Chad Duell (Michael Corinthos).

For starters, Carnes talked about working with William deVry (Julian Jerome) and building Julian’s father-son relationship with Lucas. Although Lucas recently cut Julian out of his life, there’s always hope on a soap. Carnes has loved getting to play the sweeter side of things with Julian, so he’s hoping Lucas and Julian can work things out – even after the “Wiley” shocker blows up.

Since Julian has ultimately been trying to protect his son, Carnes thinks that could be Julian’s shot at repairing the damage. He suggested, “…maybe there is some way that Julian can convince Lucas that it really was the only thing that he could do at the time.”

Carnes also had high praise for Katelyn MacMullen (Willow Tait) and is looking forward to more shared airtime after the “Wiley” bomb drops. “I’ve really enjoyed our scenes and I hope we get to explore what will probably end up being anger and grief and a whole bunch of emotions together.”

That brings us to Michael and that jealousy issue involving Chad Duell! It turns out Carnes adores working with the twins who play “Wiley.” Erik and Theo are real cuties, so it’s easy to see why Carnes doesn’t want to give up Daddy duty. He laughed and insisted he’d be “absolutely be jealous and not okay with” Duell taking over.

Carnes had nothing but good things to say about the Olson twins. “They are just the sweetest, most joyful, gentle little boys,” Carnes said. He suggested that they melt everyone’s heart, including his own. That’s why it’ll be devastating to watch “Wiley” get ripped away from Lucas. When those scenes inevitably arrive, GH viewers are in for some crushing moments.