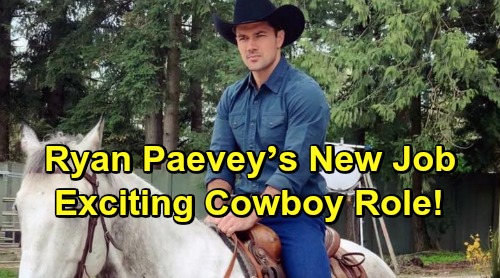 General Hospital (GH) spoilers have some great news to pass on about a popular ex-GH star. Ryan Paevey, who portrayed Nathan West on the ABC soap, has landed a role in a Hallmark Channel movie. Ryan is currently filming the movie tentatively titled “Dude Ranch” in British Columbia.

There aren’t many details yet about the movie, but we can glean some basic plot points from the various social media posts that have been made by Ryan and others involved in the movie.

First off, Ryan shared an Instagram photo of himself in cowboy garb and riding a horse along with the following caption: “I think the hat’s growing on me. Figuratively speaking, that is. #hallmarkchannel #duderanch #onset #stillworkingoncantering.”

Ryan’s costar in the movie, Erin Krakow, also shared a teaser on her Instagram feed. She posted a gif showing herself and Ryan popping up in the window of a horse stall and commented: “Gettin’ a little bit country with @RyanPaevey! @hallmarkchannel.” In the gif, Ryan is wearing the same cowboy hat he referenced in his Instagram post, so the hat must be a staple of his character in the movie.

It appears that Erin is Ryan’s leading lady in the movie. You may remember Erin from The Lifetime Channel’s series “Army Wives.” She portrayed Tanya Gabriel on that show, as well as Elizabeth Thatcher on the Hallmark Channel series “When Calls The Heart.”

Finally, the director of “Dude Ranch,” David Winning, shared a behind-the-scenes photograph on his Twitter account. The photograph showed Ryan shooting a scene with his young co-star Ava Grace Cooper. Ava has appeared in “When Calls The Heart” and “The Edge Of Seventeen.”

Given all of these details, we can surmise that the movie is a love story about a rancher (Ryan Paevey) who falls in love with the character played by Erin Krakow, with Ava Grace Cooper’s character likely being the child of one of the lead characters. It sounds like a great movie, and fans of Ryan’s will want to keep an eye out for it down the road.

Are you looking forward to seeing Ryan in “Dude Ranch?” Stay tuned to the ABC soap and don’t forget to check CDL often for the latest General Hospital spoilers, updates, and news.

I think the hat’s growing on me. Figuratively speaking. #hallmarkchannel #duderanch #onset #stillworkingoncantering