General Hospital Spoilers: Shiloh Takes a Hostage to Save His Own Life – Desperate Plan to Avoid Sonny’s Death Order 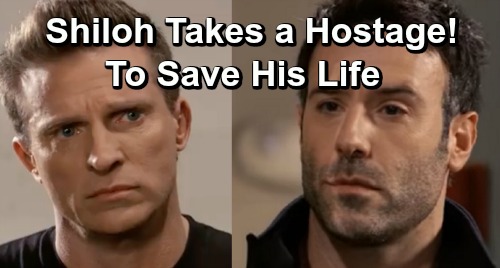 General Hospital (GH) spoilers reveal that Sonny Corinthos (Maurice Benard) is tired of dealing with Shiloh Archer (Coby Ryan McLaughlin) and his hold on Kristina Corinthos-Davis (Lexi Ainsworth). He wants Shiloh taken care of now, so he orders a hit on Wednesday, April 24. Sonny pushes Jason Morgan (Steve Burton) to eliminate Shiloh, so how’s Shiloh going to fight back against this threat?

Shiloh may need a hostage to save him from sudden death. Sam McCall (Kelly Monaco) is one option to consider. She’s trying to find out information from Shiloh about Kristina’s pledge to Dawn of Day. Shiloh thinks Sam is ready for the next level, so they should begin her initiation into “The Trust.”

Could Sam be there as Jason prepares to carry out the hit? Shiloh believes Jason would never take him out with Sam close by, but he’s wrong about that. Sam knows Jason would have no problem killing Shiloh and protecting her in the process. Since Jason would stop at nothing to save Sam, perhaps she’s not Shiloh’s best choice. He’d be risking Jason’s wrath and a deadly bullet.

Shiloh wants Willow back in the DoD fold and could grab her for cover. However, putting Willow in the middle of all this would bring the PCPD’s full force. You can bet Harrison Chase (Josh Swickard) would do everything in his power to free Willow and make sure Shiloh pays. Shiloh would have the cops hot on his trail in no time.

There’s one GH character who would make both Jason and Sonny back off long enough for Shiloh’s getaway. General Hospital spoilers say that would be Carly Corinthos (Laura Wright). Carly is pregnant, so Jason would be all about protecting his bestie and her baby. Sonny would be willing to deal with Shiloh to get Carly back and keep her safe along with their little one.

Will Sonny be forced to make a difficult choice? Will Sonny turn Kristina, who wants to be with Shiloh, over to him to save his unborn child? The baby factor could be a big issue here. Unlike the other hostage options, an incredibly stressful situation could do serious damage to Carly and her kid. She might suffer a miscarriage or experience some complications that put her own life on the line.

Sonny wouldn’t want to risk losing Carly or their baby, so he might let Shiloh live for now. We know Coby Ryan McLaughlin screen tested with Laura Wright, so these scenes could be why. Carly would be the ultimate hostage to help Shiloh avoid death. That is, of course, unless things go south! If anything happens to Carly and her unborn child, Sonny will certainly seek deadly vengeance.