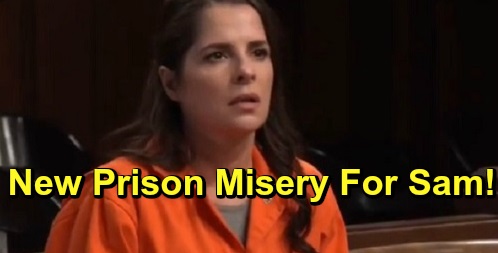 General Hospital (GH) spoilers tease that Nelle Benson (Chloe Lanier) will get back in the action. She doesn’t pop up much, but her appearances always pack in plenty of drama. GH fans know Nelle’s still hoping to secure her release from Pentonville. She pushed Martin Gray (Michael E. Knight) to help her out and promised there’d be plenty of money in it for him if he pulled it off.

However, it’s still going to take Martin some time to figure this out. Nelle was denied parole, so Martin’s got his work cut out for him. He may comb through every legal loophole he can think of in an effort to help Nelle and get his hands on serious cash.

Martin also called Valentin Cassadine (James Patrick Stuart) after his recent chat with Nelle. He alluded to a projected they had discussed and pointed out that a new avenue just opened up. Valentin may get involved in Nelle’s story eventually, but her story will remain at Pentonville for now. General Hospital spoilers say Nelle will receive a new cellmate, so this should bring some interesting moments.

Since Cassandra Pierce (Jessica Tuck) was presumed dead in an explosion, she won’t be rejoining Sam McCall (Kelly Monaco). It makes sense to give Sam another horrible cellmate for drama’s sake. Nelle may not seem as dangerous as Cassandra on the surface, but she can be pretty sinister at times. After all, Nelle admitted to killing her former fiancé, Zachary Grant. She also tried to order a hit on Michael Corinthos (Chad Duell), so Nelle isn’t some innocent flower.

Luckily, Nelle can’t mess with Sam too much or she’ll blow her attempt to get out of the slammer. There’s no imminent danger to Sam with Nelle as her cellmate – unless, of course, Sam finds out too much and has to be silenced. Nelle’s seemingly got big plans for the Quartermaine shares and is keeping a lid on “Wiley Cooper-Jones’” true identity as well.

Sam could run into some trouble if she starts figuring things out, but Nelle may prove to be an annoyance at first. It’s also possible Nelle’s cellmate will be someone else, but Sam’s the most logical option since she indeed needs a new cellmate. Michael, Jason Morgan (Steve Burton) and Carly Corinthos (Laura Wright) will likely get some frustrating updates soon enough.