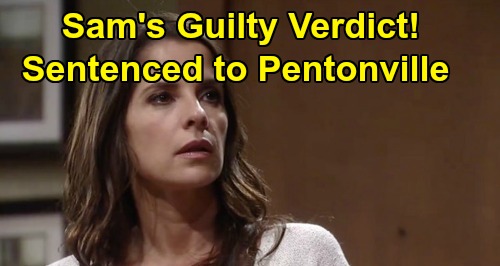 General Hospital (GH) spoilers tease that Sam McCall (Kelly Monaco) will go before a judge with Diane Miller (Carolyn Hennesy) and hope for the best. GH fans know Diane had a controversial suggestion for Sam. She brought up the idea of a bench trial, which is a speedier option that could get Sam back home with her family sooner.

It also prevents Sam from having to face any potential Dawn of Day members on a jury. Sam will simply face one fair judge who’s able to look at the facts and the facts alone. Of course, that doesn’t mean Sam will get off the hook! Jason Morgan (Steve Burton) expressed concern about putting Sam’s fate in the hands of one person, and Alexis Davis (Nancy Lee Grahn) thinks this strategy may be too risky as well.

Diane is normally the best in the biz, but her tactic could be a poor choice this time. General Hospital spoilers say Sam will learn her verdict during the week of November 18-22. Unfortunately, Sam will also be deeply distressed that week. She’ll be shaken by some unexpected news – and we’re betting it’s a conviction. GH wouldn’t have played up Alexis and Jason’s worries so much if this was going to turn out splendidly.

It sounds like Sam will be sentenced and hauled back off to Pentonville, so what will Jason do? At that point, Jason will have no choice but to prove Sam’s innocence. In order to do that, Jason will need to take down Peter August (Wes Ramsey). That’s easier said than done since Peter’s one slippery character.

However, Jason has no intention of letting his true love rot behind bars. He’ll immediately turn to Damian Spinelli (Bradford Anderson) and count on him to make things happen. They have to dig into Peter’s shady activities and show the judge that Sam was set up.

Sam’s future will depend on exposing Peter, so you’d better believe Jason will make it happen! Peter could be in grave danger once Jason gets his hands on evidence. He already warned that Anna Devane (Finola Hughes) and Maxie Jones’ (Kirsten Storms) affinity for Peter wouldn’t save him. Peter’s going to regret targeting Sam if Jason has anything to say about it!