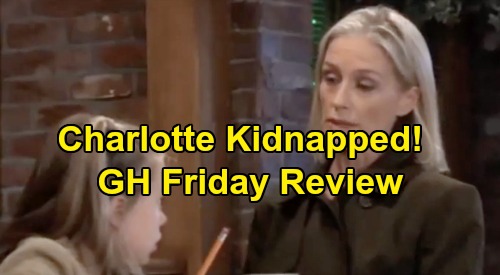 General Hospital (GH) spoilers review for Friday, November 8, reveal that Cassandra Pierce (Jessica Tuck) and Nikolas Cassadine (Marcus Coloma) bickered as Nikolas drove the getaway van away from Rice Park, where Cassandra had broken free from police custody. Nikolas griped about Cassandra trying to blackmail him and putting his entire operation in jeopardy, and about her failure to deliver information that could destroy Valentin Cassadine (James Patrick Stuart).

Cassandra quickly figured out that Nikolas wasn’t taking her to an airport, and Cassandra hopped out of the back door of the van, making her escape. Agitated, Nikolas called Jasper “Jax” Jacks (Ingo Rademacher) and told him that their situation had been compromised, then called the police and anonymously tipped Harrison Chase (Josh Swickard) off as to Cassandra’s general location.

Cassandra then made her way to Kelly’s, where she spied Charlotte Cassadine (Scarlett Fernandez) sitting alone at the counter. While Lulu Spencer (Emme Rylan) and Maxie Jones (Kirsten Storms) were deep in conversation at a nearby table, Cassandra approached Charlotte and told her not to scream, or else Nina Reeves (Cynthia Watros) would be in a lot of trouble. Then she said that Charlotte could save Nina by doing everything she was instructed to do.

Of course, Cassandra’s a real wild card at this point. She could have chosen to simply disappear, but she decided to go after Valentin’s daughter, which is an interesting and dangerous move. She might be hoping to force Valentin to help her, but she just might have dug her own grave, as Valentin will be livid to find his daughter in danger.

Meanwhile, Lucas Jones (Ryan Carnes) visited Tony Jones’ (Brad Maule) gravesite for comfort and wisdom. As GH viewers know, Lucas is in turmoil because he just learned that Julian Jerome (William deVry) tried to undermine his marriage to Brad Cooper (Parry Shen), yet he doesn’t trust Brad either. Suddenly, Tony’s spirit appeared to Lucas, and it was a touching father/son reunion.

Lucas didn’t exactly relay the whole sordid story of what Julian did to Tony, but he did allude to problems and to his fears of making mistakes that could torpedo Wiley Cooper-Jones’ (Theo and Erik Olson) life. He also revealed to Tony that he had let Julian back into his life, which proved to be a mistake since Julian framed Brad. He noted that he now has to decide whom to trust in this situation.

Ultimately, Tony didn’t tell Lucas what to do, but instead told him that he had a brave heart and he needed to trust it. The men also shared some nice memories of Lucas’ childhood, when Lucas helped his father in the aftermath of BJ Jones’ (Brighton Hertford) death. Bobbie Jones (Jacklyn Zeman) then called Lucas to let him know that Julian was looking for him, to which Lucas replied, “Tell him if he wants to see me, that I’m with my father.”

Finally, Jax went to Shadybrook to visit with Ava Jerome (Maura West), clearly feeling guilty about the fact that she self-committed. He told Ava that he felt responsible for what happened to her because of all the criticism she faced after the Crimson article.

But Jax was really there to fish for information about her Nikolas sighting and the portrait of Helena, which he suspects made it into Ava’s hands. Ava fell for the ruse for awhile, but then she caught on that Jax was after the portrait, and that irked her.

She then remembered overhearing Laura Collins (Genie Francis) telling Jax on the phone that he and Hayden Barnes (Rebecca Budig) were looking for the portrait of Helena. Ava became agitated as she realized that Jax’s whole visit wasn’t out of the goodness of his heart, and that all he wanted was the portrait. Ava then blasted him for trying to take advantage of her.

Ultimately, Ava declared that the portrait was hidden somewhere where no one will ever find it, and that Jax would never take anything from her. Jax left sheepishly as Ava screamed after him. One wonders where Ava has stashed the portrait, but ultimately someone is going to have to convince her to fork it over, but who will convince her first?