General Hospital Spoilers: Sam Trapped After Racing to The Haunted Star – Jason Steps Up to Rescue His Love 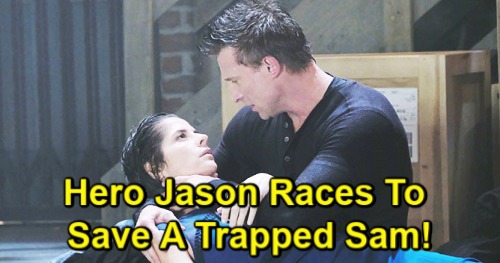 General Hospital (GH) spoilers tease that Sam McCall (Kelly Monaco) will find herself in another scary situation. Will Shiloh Archer (Coby Ryan McLaughlin) play a role in it? Peter August (Wes Ramsey) has agreed to help him, so Shiloh doesn’t expect to do any time for his crimes. He’ll take the stand in his own defense during the week of September 16-20, but DA Robert Scorpio (Tristan Rogers) will hit hard.

Shiloh won’t be worried about the outcome of all this. Whether Shiloh gets off the hook or just has a chance to escape the courthouse, there should indeed be some way to secure his freedom. He’ll be able to cause some chaos during the week of September 23-27, which will bring growing concerns for Jason Morgan (Steve Burton).

Nelle Benson Has Offered To Assist Shiloh Archer With Wiley

Of course, Nelle Benson (Chloe Lanier) and Ryan Chamberlain (Jon Lindstrom) could eventually fit in this mess. Nelle has offered to assist Shiloh in getting his son back, but she knows Shiloh isn’t “Wiley Cooper-Jones’” father. It seems Nelle is playing Shiloh, but her plan hasn’t come into focus just yet.

Regardless, there’s danger brewing for Sam. Shiloh is a constant source of drama for her, so he could easily be involved here. There may be some ordeal where Sam’s trying to protect “Wiley.” She certainly wouldn’t want Lucas Jones (Ryan Carnes) and Brad Cooper (Parry Shen) to lose their little boy.

General Hospital spoilers say Sam will race to The Haunted Star on September 23. Meanwhile, Jason will fear the worst when he can’t get in touch. He’ll frantically call Sam, but she won’t pick up.

Will This Be Shiloh Archer’s Last Attempt At Revenge On JaSam?

Jason will be desperate to find Sam before it’s too late, but she’ll find herself in one of her usual jams. GH fans can expect Sam to get trapped, so that’ll undoubtedly put Jason in hero mode once again.

It’ll be interesting to see how this suspenseful storyline comes together. The main idea is that Sam will be in grave danger; she’ll be stuck with no way out! Shiloh is usually to blame when Sam winds up in these dire circumstances, so this could be a final attempt at revenge as well as a plot to kidnap “Wiley.”