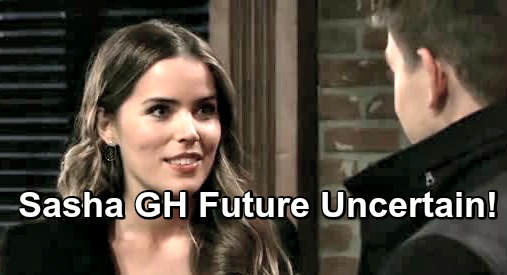 General Hospital (GH) spoilers tease that Sasha Gilmore’s (Sofia Mattsson) future in Port Charles is uncertain. She’s already been on the fence about hanging around for obvious reasons. When Sasha signed up for this scheme with Valentin Cassadine (James Patrick Stuart), she just thought she’d make some money and move on. Sasha never expected to form a deep bond with her fake birth mother.

Now Sasha regrets deceiving Nina Reeves (Michelle Stafford), but she also doesn’t want to hurt her or provoke Valentin’s wrath. To complicate matters even further, Sasha has quickly fallen for Michael Corinthos (Chad Duell). General Hospital spoilers hint that they may attend the Nurses Ball together, so that’ll be another big step forward for them. Michael and Sasha will fall harder every time they’re together.

Of course, that’s probably bad news for both of them. Michael’s been burned by too many lying love interests and has given out too many second chances. He may not be willing to look past Sasha’s deception once the truth comes out. No matter how remorseful Sasha is, Michael just may not see things her way.

Michael’s apparent feelings for Willow Tait (Katelyn MacMullen) could have something to do with that. Part of him seems to wish he were with Willow, so he may not bother forgiving Sasha. She’s not the woman Michael really wants.

What about Nina though? Sasha may hope they can still keep up this mother-daughter bond, even without blood ties. She’ll likely beg Nina for forgiveness, but that’s something Nina may not be willing to give. General Hospital has pretty much kept Sasha in a bubble since her debut. Nina, Valentin and Michael are the group she’s mostly connected to.

Once all three of them turn against Sasha, where does that leave her? With a one-way ticket out of Port Charles? Sasha could easily skip town after the shocking exposure. She might feel like there’s nothing left for her in PC.

Then again, it’s possible Sasha will stay for a while and try to make things right. Even if she fails miserably, it might be worth a shot! Whatever the case, Sasha’s future at GH is up in the air.