General Hospital Spoilers: Shiloh Blows Up Oscar’s Will Reading in a Big Way 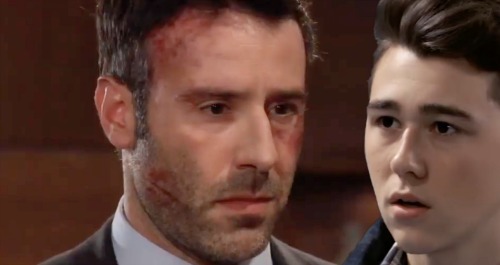 General Hospital (GH) spoilers tease that another bombshell’s brewing in Port Charles. GH fans know Oscar Nero Quartermaine’s (Garren Stitt) death has come with plenty of surprises. He had a few of them planned for his memorial service and later made sure Josslyn Jacks (Eden McCoy) got a special video message. Nevertheless, there’s one more Oscar-related event that’ll deliver a shocker.

During the week of July 8-12, Oscar’s will reading will begin. There’ll undoubtedly be a few curveballs from Oscar himself, but there’s a guest who could make a few waves, too. General Hospital spoilers say Shiloh Archer (Coby Ryan McLaughlin) will be an unwelcome attendee around the time of this gathering. Perhaps Oscar named Shiloh and Dawn of Day in his will.

In other words, Shiloh may be invited by dead Oscar and unwanted as far as the rest of the guests are concerned. Even Kim may have changed her tune by then. She’ll be busy delivering plenty of apologies, so she may have a vital conversation with Julian Jerome (William deVry) and realize Shiloh’s pure evil.

Of course, the deed will probably already be done when it comes to the baby Kim wants. She’ll probably just have to hope she’s not pregnant with Shiloh’s spawn. It’s possible Kim’s baby-making efforts will be part of the blowup that comes next. General Hospital spoilers say Oscar’s will reading will take a wild turn. It’ll reach a stunning conclusion, so it’ll be interesting to what causes the erupting drama.

There’s a chance the will itself will be to blame for that. Oscar was a trusting kid, so he may have left Shiloh a bequest no one else is happy about. However, there’s also a chance someone will start a fight with Shiloh and spark a revelation. If Kim indeed hooks up with Shiloh in an attempt to have a kid, that could come out publicly and enrage Julian along with Drew Cain (Billy Miller).

It’s even possible Shiloh will be arrested again since Sam McCall (Kelly Monaco) will be relieved on the day of this gathering. Sam insisted Shiloh’s past was catching up with him, so Jason Morgan (Steve Burton) may find something that will stick regarding Douglas Miller. Regardless, it certainly sounds like Shiloh will be the reason Oscar’s will reading goes awry!