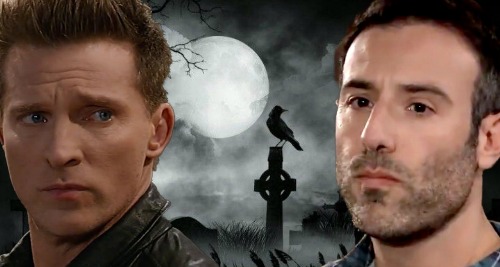 General Hospital (GH) spoilers tease that Shiloh Archer (Coby Ryan McLaughlin) had better watch his back. He’s making some vicious enemies in Port Charles, so one of them’s bound to strike sooner or later. Sonny Corinthos (Maurice Benard) and Jason Morgan (Steve Burton) are obviously the worst threats here, but there are other characters around town who’d love to see Shiloh go down.

Willow Tait (Katelyn MacMullen) obviously wants to eliminate Shiloh’s threat as well. However, Jason is the one who seems most likely to resort to drastic measures – whether he’s acting on his own or on Sonny’s orders. There have been some deadly hints on GH lately, so things aren’t looking good for Shiloh. General Hospital seems to be driving home the point that Jason could’ve killed him.

If “Stone Cold” wants someone dead, you can bet he or she’s headed underground! Jason could’ve finished Shiloh off outside Kelly’s if he’d really wanted to. Of course, Jason would’ve paid the price for that. He wouldn’t want a prison sentence to separate him from Sam and the kids, especially after all that time he spent at the Russian clinic.

It’d be better for Jason to wait until there are no witnesses. Shiloh went back to the PCPD and got the charges dropped, but he warned Sam that he wouldn’t be so forgiving next time. He argued that if Jason came after him again, it would prove he was beyond redemption. This seems like the setup for another dangerous encounter between them down the road.

On April 9, General Hospital spoilers say Jason will have to act fast. He’ll have to make an impulsive decision – most likely to protect someone he loves. April 10 will leave Alexis anxious to get in touch with Sonny. Will something happen to Shiloh? Will Alexis suspect that Sonny’s behind it?

That same day, Willow will feel like her nightmare is over. She’ll believe she’s safe at last, so what would do that other than Shiloh being in jail or dead? Of course, “dead” doesn’t have to mean “dead-dead.” It can mean a soapy presumed death that sets up the possibility for a comeback.

Then again, maybe there are some other options after all. Shiloh could land in a coma after some shocking incident and not be given much hope. Another possibility might be Shiloh going into hiding. If he believes he’s going to be arrested, Shiloh might decide to head for the hills. Willow might be convinced he can never show his face in PC again without risking everything.

However, General Hospital spoilers make it seem like Jason will do something to physically harm Shiloh. It’d be weird for GH to kick Shiloh out of a major story so soon, but they could leave him fighting for his life and reserve the true demise until later. Regardless, Harmony (Inga Cadranel) will be total panic mode as she sends an SOS on April 10. She may fear DoD’s future is in jeopardy.

GH buzz suggest that Shiloh could fake his death and achieve 2 goals – frame Jason and get him out of the picture for a bit as well as disappear making his evil plots easier to carry out.

Bottom line, Shiloh seems like he’ll be a tough guy to get rid of. Even if other GH characters think this cult crisis is finished, Shiloh may make a surprising comeback for one last round. On the bright side, a character this sinister won’t be able to survive indefinitely. Shiloh will surely bite the dust sooner or later!

Are you eager to see Shiloh get what he’s got coming? We’ll give you updates as other news emerges. Stay tuned to the ABC soap and don’t forget to check CDL often for the latest General Hospital spoilers, updates and news.