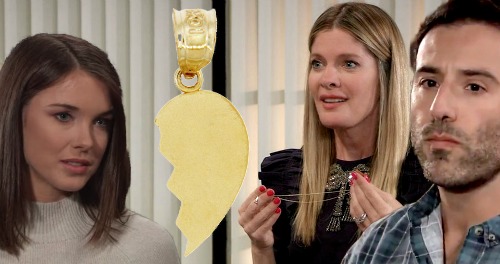 General Hospital (GH) spoilers tease that the other half of Nina Reeves’ (Michelle Stafford) heart pendant will inevitably pop up. That’s a huge clue about the identity of Nina’s real daughter, so GH has to explore it. There’s a good chance the rest of the necklace will surface eventually, and it may be in the possession of Shiloh Archer (Coby Ryan McLaughlin).

Willow Tait (Katelyn MacMullen) finally wised up and saw that she had to flee Dawn of Day. She just couldn’t bear the thought of teaching kids to follow this sinister man anymore. Shiloh recently stopped by the school to give Willow a picture they took together. However, he may have one last item that would completely rock Willow’s world.

Willow’s parents got her into DoD, but they must’ve had some secrets. Perhaps Willow’s adoptive mother confessed to taking Willow from Nina as part of her trust offering. That half-heart pendant might’ve been handed over as proof. There have been obvious hints about Nina being Willow’s birth mom, so this would be an excellent way to connect the dots.

Shiloh could easily dangle the promise of the truth in front of Willow. He might reveal that he knows who her real mother is and hope that this somehow lures her back to DoD. Willow hasn’t shared much about her past or her family on GH, but she admitted they moved around a lot. That lines up with a black-market adoption since it would’ve allowed them to hide their trail.

Many General Hospital fans believe the animosity between Nina and Willow is a clear sign of what’s to come. This is the classic soap setup of mother-daughter hate that can eventually turn to love. Some viewers even see a resemblance between Willow and the late Silas Clay (Michael Easton), who was the father of Nina’s baby. It’s possible GH had that in mind when they were casting the part of Willow.

Regardless, Willow certainly seems to be Nina’s biological daughter. The truth has to come out one way or another, so it makes sense to bring the half-heart pendant into this through Shiloh. Everything could blow up and put Willow on the path to the real story of her family history.