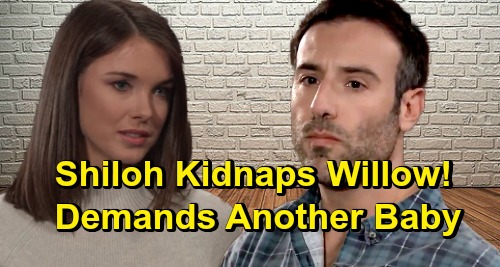 General Hospital (GH) spoilers tease that Shiloh Archer’s (Coby Ryan McLaughlin) obsession could drive him to do some desperate things. During a recent chat with his attorney, Shiloh was asked if his goal was to reclaim his child or the child’s mother. He made it clear that he wants not just “Wiley Cooper-Jones” but Willow Tait (Katelyn MacMullen) as well.

Shiloh wants to get back the family he was meant to have – at least in his delusional mind. There was never any kind of love story going on. Willow was manipulated into having sex with Shiloh and had to give Wiley up to protect him. She obviously isn’t interested in having any kind of relationship with Shiloh. Willow has done everything she can to distance herself from Shiloh and keep her son safe.

The problem is Wiley isn’t really Willow’s son. He isn’t Shiloh’s either, so that’s sure to bring a mixture of devastation and rage for this cult leader. General Hospital fans know Willow was also duped, so Shiloh won’t hold the baby swap revelation against her. In fact, Shiloh may view this as a chance to salvage what’s left of his dream.

Wiley may be dead, but Willow’s still around and could bring another child into the world for him. Will Shiloh shift his obsession to creating a new heir? It’s reasonable since Shiloh’s been stuck on Willow for years and has now latched onto this baby idea. Since Willow is so against having anything to do with him, Shiloh would have to resort to drastic measures to bring her close again.

It’s possible Shiloh will kidnap Willow and run away with her somewhere. He might hope he can brainwash her into feeling the way she used to feel – grateful and submissive. That’s how Shiloh likes his women. He wants them to be in awe of his brilliance and obedient when it comes to sexual encounters.

Naturally, Willow wouldn’t be persuaded this time. Shiloh’s plan wouldn’t work, but that wouldn’t stop him from trying. This would be a great opportunity to have Harrison Chase (Josh Swickard) rescue Willow before Shiloh took advantage of her. It’d bring some romantic “Chillow” moments after Chase saved the day. He’s the dashing young hero that GH viewers deserve!