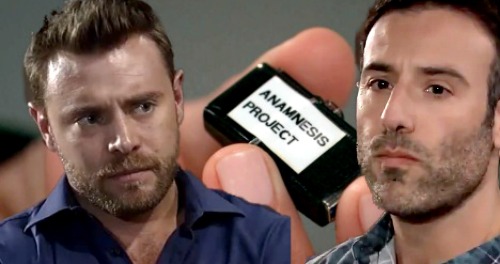 General Hospital (GH) spoilers tease that Shiloh Archer (Coby Ryan McLaughlin) will remain on edge over Drew Cain’s (Billy Miller) memory. He’s far too eager to make sure Drew’s past stays buried, so there has to be some juicy info deep in Drew’s mind. It sounds like Drew knows something that could put Shiloh away, but he can’t access those memories at the moment.

Drew doesn’t want to lose the memories he’s made in Port Charles, especially the ones he made with Oscar Nero Quartermaine (Garren Stitt). GH will likely work around that eventually, but this fact means Drew’s stuck for now.

He can’t have a memory procedure done without putting his recent memories at risk. Shiloh should feel pretty good about that, but what if Drew sent a clue he doesn’t know about because it’s lost with his past memories?

GH fans will recall that Drew sent Dr. Kim Nero (Tamara Braun) a CD before they parted ways. He picked out some special songs for her, so she’s kept it all these years. General Hospital recently mentioned that CD again, which may be significant. Will it become part of the Shiloh story soon? It’s possible Drew secretly sent some info to Kim on that CD.

The song selection could represent something that might be important. There was a theme about water, which was kind of an odd choice for a love CD. That may be something General Hospital will explore. There could even be a secret encryption that Kim isn’t aware of.

If Drew had reason to believe Shiloh could turn on him, he might’ve put the info on the CD and sent it to Kim for safekeeping. It could be something Kim will discover eventually. On the other hand, Drew could be the one to figure this out. If Drew manages to get his memories back another way, he might remember where he hid the proof.

Regardless, it’s clear that Shiloh’s worried about this deep, dark secret. What could it be? Shiloh’s initiation ceremonies tell us he’s a rapist, but he’s been able to avoid evidence against him so far. That might be a route for GH to take, especially if Shiloh raped someone underage. Murder is another likely option.

It’d be fitting for there to be a recording of Shiloh’s confession – perhaps hidden on the CD. He uses pledges against members of “The Trust.” Hopefully, Drew will use one against Shiloh sooner or later.

No matter what secret Shiloh has buried, it’ll probably just prove there’s no chance of redemption. Shiloh seems destined for a grim fate down the road. Of course GH has been known to flip the script when they want to keep a character around – example being Wes Ramsey’s Henrik the monster – who is now the charming and heroic Peter.

Most GH fans want nothing more than for Jason Morgan (Steve Burton) to bury Shiloh in the pine barrens ASAP. General Hospital spoilers say some great drama’s ahead in PC, so stay tuned for all the action. We’ll give you updates as other news comes in. Stick with the ABC soap and don’t forget to check CDL often for the latest General Hospital spoilers, updates and news.