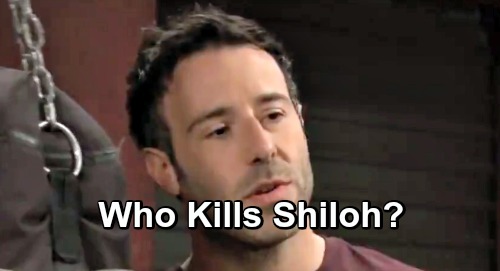 General Hospital (GH) spoilers reveal that Shiloh Archer (Coby Ryan McLaughlin) is making enemies left and right in Port Charles. Involving Kristina Corinthos-Davis (Lexi Ainsworth) could bring him far more trouble than he bargained for. Will Shiloh survive his shady GH stint? It doesn’t seem likely, so let’s look at a list of killer candidates and try to figure out who might be the one to permanently eliminate Shiloh.

Jason Morgan (Steve Burton) has watched over Kristina since discovering that her father was Sonny Corinthos (Maurice Benard) in 2004. There’s no way Jason is going to let someone get by with hurting Kristina, and Shiloh has clearly been taking advantage of her. Shiloh is also getting ready to blackmail Kristina with her trust offering and plans to rape her if she returns to the cult.

Since Kristina is Sam McCall’s (Kelly Monaco) sister, that’s the next strike against this cult leader. It gives Jason another reason to murder Shiloh if he runs out of options. Of course, Sam herself could do the deed. She’s been onto Shiloh for some time now and knowing what his intentions for Kristina are makes her hatred even worse.

When Sam realizes what Kristina’s pledge entailed, she’s going to be more determined to take Shiloh down. There’ll be more at stake since Sam will want to protect Kristina AND Alexis Davis (Nancy Lee Grahn). If she feels she has no other choice, Sam could very easily take out Shiloh for her family.

Usually, Sonny lets Jason take care of things like this, but he may make an exception this time around. He might even want the satisfaction of shooting that smug smile off Shiloh’s face. It could also be a matter of necessity if Jason is busy putting out another fire or saving someone else from harm. Sonny could certainly step up if it comes to that.

General Hospital fans know Kristina gave Shiloh information about Alexis. It’s not beyond the realm of possibility for Alexis to take out Shiloh to save herself. She’s killed before and probably would again if the situation called for it. If Alexis believes Sam and Kristina are in imminent danger, she might unleash her fierce protective side and take care of business.

Julian Jerome (William deVry) is another killer candidate when it comes to Shiloh. He cares deeply about both Alexis and Kristina. Once Julian realizes Shiloh is running a cult and learns what he’s planning to do to Kristina, he’ll hit the roof. Since Kristina gave Shiloh info that could hurt Alexis, that’ll only add to Julian’s rage. He’ll want revenge just like everyone else.

When Brad Cooper’s (Parry Shen) secret about the baby switch is discovered, he’ll probably lose Lucas Jones (Ryan Carnes). Brad stole Michael Corinthos’ (Chad Duell) child and kept the truth from his husband all this time. Now that Brad’s involved in Dawn of Day, it could lead to the exposure of his secret.

Whether it’s through some chain reaction involving Willow Tait (Katelyn MacMullen) or just gullible Brad unburdening himself, the baby swap shocker will come out eventually. Brad’s committed his fair share of crimes, so murder wouldn’t be a stretch for him.

Then again, Willow herself could murder Shiloh over what he did to her while she was in the cult. She told Michael Corinthos (Chad Duell) she was afraid she might kill Shiloh if she encountered him at the house, so she put herself on our suspect list. However, Willow is more likely to react if Shiloh gets his hands on “Wiley Cooper-Jones,” who Willow believes is her son.

Willow has gone to great lengths to protect what she thinks is her child. She would absolutely kill Shiloh for “Wiley’s” sake if there was no other way out. Shiloh’s death would be a terrific umbrella story for General Hospital and would please a lot of viewers. Who would you choose as Shiloh’s killer from our list of suspects?

General Hospital spoilers say Shiloh will keep manipulating people and making adversaries all over the place. One of them just might eliminate this problem for good down the road! We’ll give you updates as other GH news comes in. Stick with the ABC soap and don’t forget to check CDL often for the latest General Hospital spoilers, updates and news.