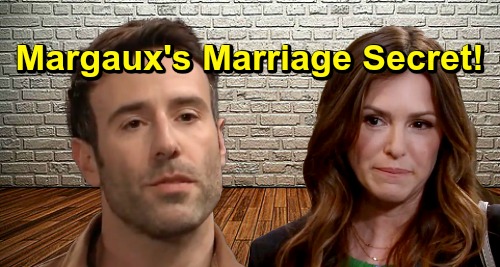 General Hospital (GH) spoilers tease that Shiloh Archer (Coby Ryan McLaughlin) could be more powerful than anyone previously suspected. Is Margaux Dawson (Elizabeth Hendrickson) in Shiloh pocket or is she a more significant part of Dawn of Day than it first seemed? Shiloh grabbed Willow Tait (Katelyn MacMullen) by the arm and told her that he is the law in Port Charles. What does that mean exactly?

Shiloh has plenty of secrets that he could use against those who have declared their loyalty. If Shiloh believes he’s the law in PC, how many officials does he have dirt on? Just how far does Shiloh’s reach go?

Margaux wanted to charge Jason Morgan (Steve Burton) with attempted murder for warning Shiloh away from his son, Danny Morgan (T.K. Weaver). Is the DA the only official Shiloh’s got a grip on or are there other officials involved as well – perhaps ones who rank even higher than Margaux?

If Margaux was to lose her job for any reason, Shiloh has Kristina Corinthos-Davis’s (Lexi Ainsworth) trust offering against Alexis Davis (Nancy Lee Grahn). She’s the former DA, so Shiloh could control her if she resumed the role. Who else could be considered for DA job? Would we get one from a neighboring city or state? That might be the only way to find someone who’s not under Shiloh’s control.

Margaux pretty much is the worst General Hospital district attorney in history. She never convicts the guilty party and always goes after people who are innocent, so it doesn’t do much good to have her on Shiloh’s side. This leads us to believe Margaux might’ve given Shiloh dirt on a higher official. That’d mean he or she could be pushed to do Shiloh’s bidding.

If not, Margaux could at least manipulate the judge’s roster to make sure a cult-friendly judge is on any DoD cases. Port Charles is Sonny Corinthos’ (Maurice Benard) town, and Shiloh is messing with Sonny’s daughter. Does Shiloh really think the law matters? He hasn’t gone up against a mob boss before – or at least not one of Sonny’s caliber.

Shiloh has also never been up against Jason and isn’t going to like it when Jason unleashes his true wrath. Plus, Sonny has info on Margaux’s mother. He’s got some power here as well, so Shiloh might want to think twice before going up against Sonny and Jason. Will he eventually wish he’d steered clear of PC altogether?

Margaux once mentioned an ex-husband named David. Shiloh’s real name is David Henry Archer, so that led to speculation that he might be that ex-husband. That didn’t seem to be the case based on their eventual interaction, but you never know how GH might decide to spin this.

Regardless, how would Margaux be OK with Shiloh drugging and raping these women? Has she not been through the trust initiation? Will Margaux still back Shiloh if Willow’s story comes to light?