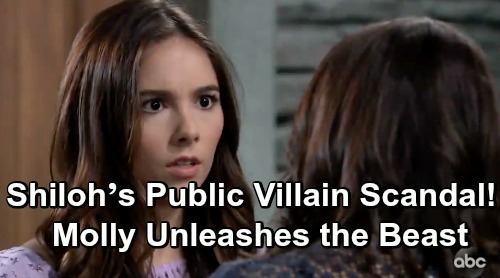 General Hospital (GH) spoilers tease that Molly Lansing-Davis (Haley Pullos) may be the next Davis family member with a target on her back. After debating the Shiloh Archer (Coby Ryan McLaughlin) situation with Kristina Corinthos-Davis (Lexi Ainsworth), Molly decided she had to do something. She approached Peter August (Wes Ramsey) with a pitch for a story that would expose Dawn of Day as cult.

Of course, Molly wants Shiloh exposed as a cruel cult leader as well. Sam McCall (Kelly Monaco) warned her sister to stay out of this, but Molly’s mind is made up. It turns out Molly’s latest idea will pull some other characters into this DoD story. General Hospital spoilers say they could easily get caught in some trouble. Shiloh is more powerful than anyone in Port Charles realizes.

During the week of May 20-24, Peter will fill Maxie Jones (Kirsten Storms) in on Molly’s suggestion. He’ll probably wonder if Maxie thinks it’s be a good read. Maxie may back Molly up and suggest it’d be a fascinating story for The Invader’s readers. None of them could know the chaos they’re about to unleash!

General Hospital spoilers say Lulu Falconeri (Emme Rylan) will also get in on this. She’s an excellent investigative journalist, so it won’t take her long to follow the trail back to Willow Tait (Katelyn MacMullen). Lulu and Harrison Chase (Josh Swickard) are friends, so Chase may assure Willow that Lulu can be trusted. Perhaps Lulu will want Willow to share her story and help shut Shiloh down.

That could be tricky since Willow is trying to protect her baby – or the kid she believes is her baby. However, it’s clear that Shiloh isn’t going to let up. He’s most likely the one who had Willow fired, so Lulu could dig into that, too.

Will Lulu dig too deep and put herself in danger? That’s a possibility to consider, so things could get troubling for Lulu without Dante Falconeri (Dominic Zamprogna) to protect her. GH spoilers say Lulu will give Willow her full support during the week of May 27-31. Alliances will form and plans will be made, so this storyline is spreading and could spiral out of control.

All of this new drama will start with Molly’s simple suggestion, which could mean more Davis family mayhem. Will Shiloh’s fury ignite after the DoD story is published? Will that be what convinces him to unleash Kristina’s pledge? We’ll give you update as other GH news comes in. Stay tuned to the ABC soap and don’t forget to check CDL often for the latest General Hospital spoilers, updates and news.