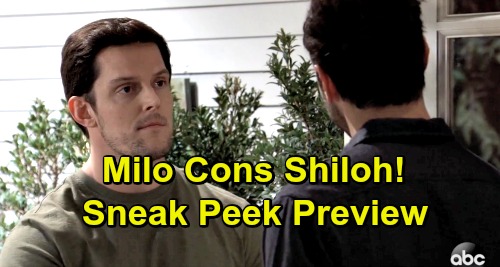 Sonny will admit that Shiloh Archer (Coby Ryan McLaughlin) has really done a number on Kristina, but he’ll remain hopeful. Sam will also mention that she knows where the pledges are – including Kristina’s, which is the one they want. Sonny will tell Sam they’re going to get her some help so they can get their hands on it. He’ll want to finish this once and for all.

It turns out Sonny has already recruited someone to take part in this plot. Over at the Dawn of Day house, Shiloh will answer the door. He’ll let the person on the other side know that there’s no need to knock. Shiloh has an open-door policy, so it’s truly a “come one, come all” kind of community.

After Shiloh introduces himself, GH fans will see that it’s Milo Giambetti (Drew Cheetwood) who’s shown up. He’ll insist that he already knows who Shiloh is and it’s an honor to meet him. Milo will naturally be feeding Shiloh’s ego here. He’ll want Shiloh to think he’s gaining another faithful follower.

Milo will introduce himself as Mark Turner, so Shiloh will shake his hand and welcome him inside. He’ll ask what led “Mark” to Dawn of Day, so Milo will pause for a moment and wonder where he should begin. General Hospital spoilers say Milo will undoubtedly have some rehearsed story to share. You don’t walk into a situation like this without a solid plan, so Milo will know exactly what he’s doing.

After “Mark” tells his tale, he’ll ask if Shiloh can help him. Milo will play the part of a vulnerable, needy soul – just the kind of person DoD targets. Shiloh will probably be thrilled that another community member just showed up out of nowhere – that is, of course, unless he’s done his research.

There’s always a chance Shiloh could play Milo, too. If he knows or figures out Milo’s working for Sonny, that could lead to more trouble for Sam. General Hospital spoilers say some hot drama’s ahead, so stay tuned. We’ll give you updates as other GH news comes in. Stick with the ABC soap and don’t forget to check CDL often for the latest General Hospital spoilers, updates and news.