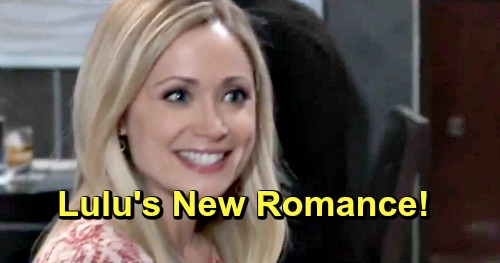 General Hospital (GH) spoilers tease that Lulu Falconeri (Emme Rylan) has some dark days ahead of her. She took some time away from Port Charles to clear her head, but it may not have done much good. Dante Falconeri (Dominic Zamprogna) is still gone for who knows how long, so Lulu will continue to feel lost and alone. She may not let on like she’s feeling this way, but it’ll be what’s in her heart.

Before Lulu took her trip, Peter August (Wes Ramsey) and Maxie Jones (Kirsten Storms) pushed her to write a book on her experiences. Thanks to the ordeal Lulu faced with Ryan Chamberlain (Jon Lindstrom), she’s certainly got an interesting story to tell. Lulu may distract herself with this project during May sweeps, but will it be enough to escape her sorrow?

General Hospital spoilers say Lulu will need her loved ones’ support next month. She may not feel like celebrating when it comes time for the Nurses Ball, but Maxie might drag her there anyway. It would be good for Lulu to go glam and try to have some fun. She can’t spend her days and nights moping at home.

GH could take a few different routes when it comes to Lulu’s future. It’s possible they’ll wait a while on pairing Lulu up again. They might want to see if Zamprogna will return down the road. General Hospital could also bite the bullet and recast at some point.

On the other hand, Lulu could find herself drawn to someone in the midst of her heartache. Since Willow Tait (Katelyn Mac Mullen) may end up with Michael Corinthos (Chad Duell) eventually, that could leave Harrison Chase (Josh Swickard) brokenhearted and single. That’d be the perfect combination since Lulu will be feeling the same way.

Of course, Lulu’s sadness could turn to bitterness or at least acceptance down the road. She might determine that Dante was right. He suggested Lulu shouldn’t wait for him, so she might start divorce proceedings eventually. If the right guy walks into Lulu’s life, she may choose to let Dante go and pursue something new.