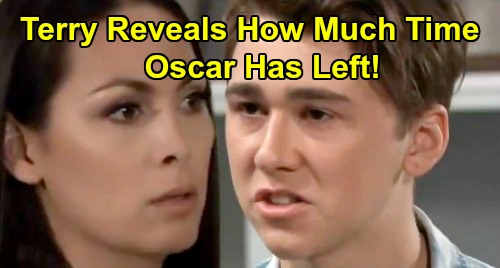 Terry admitted she couldn’t nail down how much time Oscar had left yet. She suggested that she’d have to monitor the tumor’s growth and give Oscar’s parents an estimate later. However, Terry assured Kim and Drew that they had a while. These parents are struggling, but at least they’ll have a chance to say goodbye.

Next week, General Hospital spoilers say Terry will have better idea of where things stand. She’ll look over all the scans and info before deciding she can make the call. Terry will know how much longer Oscar can expect to live. She’ll tell Drew and Kim along with Oscar himself, who’ll fill Josslyn Jacks (Eden McCoy) in on Terry’s updates.

Oscar was an angry mess when he first found out about his cancer. That was mostly because Kim had kept the truth from him for so long. Drew even kept the secret for her, so Oscar felt like he wasn’t in control of the situation. He was hurt and emotional, so that led to his push for emancipation and his decision to shove Joss away.

However, things are different now. Oscar has a loving and supportive Josslyn in his corner. He made the choice to try the treatment and even though it failed, it was his choice. Oscar was in the driver’s seat. He’s also had a chance to process the news and make peace with it. Now that Oscar knows there’s no hope left, he’s choosing to see the relief in it. There’s no more wondering.

After Terry offers Oscar a timeframe of when he can expect to die, he’ll embrace as a guideline of how much life he can cram into his final months. Oscar will hope Josslyn can do the same. He won’t want them to spend all their time being sad when they could make some happy memories instead.

The teens will handle all this quite well, but the same can’t be said for Kim. GH spoilers say she’ll be on a downward spiral soon. Kim will feel like her world’s spinning out, so expect some wild behavior and outburst. Her life has revolved around Oscar ever since he was born. Kim knows that losing him will completely shatter her.