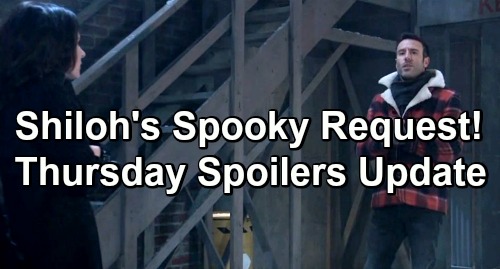 While Ryan contemplates Jordan Ashford’s (Briana Nicole Henry) progress, Lulu Falconeri (Emme Rylan) will do the same. She’ll tell Peter August (Wes Ramsey) that the cops are missing some connection. Lulu will be anxious to find out what it is, but Peter will fret about that plan. He’ll worry that Lulu could find herself in danger if she digs too deep.

Over with Anna Devane (Finola Hughes), she’ll be excited about another chance. Will she enjoy another opportunity to bond with her son? Anna and Peter recently spent some time together at Anna’s holiday party, but she’s looking for more. It turns out Anna will get it, but she’s also got a terrible medical crisis headed her way. Anna will suddenly go blind by the end of the week!

Before the GH drama erupts, Dr. Hamilton Finn (Michael Easton) will delight in the calm before the storm. He’ll chat with Alexis Davis (Nancy Lee Grahn) about the happiness he’s found with Anna. Alexis will be pleased to know Anna and Finn are still moving in a blissful direction. She considers Finn a good friend and only wants what’s best for him.

Other General Hospital spoilers say shady Shiloh Archer (Coby Ryan McLaughlin) will have a problem on his hands. At least he’ll claim to have a problem! You never really know what to believe with this guy. Nevertheless, Shiloh will ask for help when he runs into Sam McCall (Kelly Monaco) and Jason Morgan (Steve Burton) down by the docks. He’ll think it’s lucky they’re all there at the same time.

However, luck hasn’t been part of the equation so far with good ol’ “Hank.” Perhaps this is another one of his staged coincidences. Shiloh may be setting some sort of trap as he continues to reel Jason and Sam into his web of deception.

General Hospital fans can also expect Port Charles’ chosen mayor to become public. Ned Quartermaine (Wally Kurth) was surprised by Olivia Falconeri’s (Lisa LoCicero) recent admission. She suggested she wasn’t sure she wanted Ned to win. It turns out Olivia will get her wish for more privacy since Laura Collins (Genie Francis) will come out on top.

It sounds like a celebration’s coming up for Laura and her supporters. We’ll keep you posted as other GH news emerges. Stick with the ABC soap and don’t forget to check CDL often for the latest General Hospital spoilers, updates and news.