General Hospital Spoilers: Sonny and Alexis Mysterious Rescue Plan To Save Kristina From Shiloh and Dawn of Day Cult 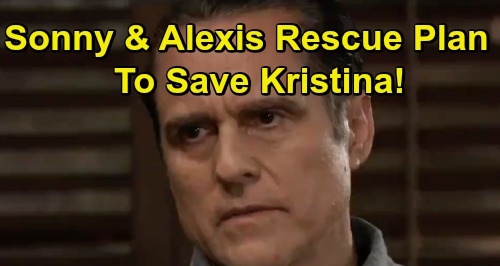 General Hospital spoilers tease that Sonny Corinthos (Maurice Benard) and Alexis Davis (Nancy Lee Grahn) will discuss their daughter Kristina Corinthos-Davis’s situation with Dawn of Day, and how to get her out of the cult. Molly Lansing-Davis (Haley Pullos) hit the nail right on the head when she pulled no punches and warned Kristina that Dawn of Day was a cult, and also spoke to their mom about it. All that resulted in was Kristina cutting both Molly and Alexis out of her life because of their “negative energy.”

Sonny may or may not be in the loop about Sam McCall’s (Kelly Monaco) plans to infiltrate the group more fully to try and rescue Kristina, although Jason Morgan (Steve Burton) did tell him about Shiloh Archer (Coby Ryan McLaughlin) and Kristina’s digging herself deeper into the Dawn of Day group.

Sonny does know that Michael Corinthos (Chad Duell) was more or less tricked into paying Kristina’s way into the top levels since she told him she needed the money for “classes” but didn’t tell him what type of classes they were, and let him assume they were academic classes.

Other General Hospital spoilers tease that Michael will have talked to Sonny about the problem, and he will assure him they will do whatever it takes to get Kristina out of the cult. He will likely encourage Michael to do so as well, whether it be by putting stop payments on checks to Kristina, or whatever he can do from his end.

Alexis may investigate the possibility of taking legal action, or trying to get a formal investigation started of Dawn of Day, but with DA Margaux Dawson (Elizabeth Hendrickson) being involved in it as well, it may be difficult to get warrants.

Sonny may want to get some of his men into the Dawn of Day as plants, which would definitely make Jason feel better about Sam’s deeper involvement, but they will need to coordinate with each other so Sonny’s plants won’t mess up what Sam is trying to do.