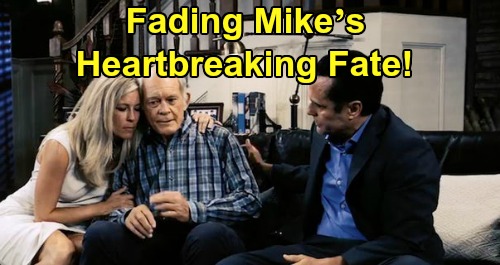 General Hospital (GH) spoilers tease that Mike Corbin’s worsening condition will bring some emotional moments. Stella Henry (Vernee Watson) will be back on the scene, so she’ll stop by to see Mike and catch him up on her trip. Unfortunately, Mike may find their conversation difficult to follow. He may not even remember who Stella is.

GH fans can expect Stella to pass along some news soon after. She might pay Sonny Corinthos (Maurice Benard) and Carly Corinthos (Laura Wright) a visit to explain the latest developments. It seems Mike could be entering the late stages of his Alzheimer’s disease. His lucid moments are fading quickly, so Stella may want to warn them about the tough phase to follow.

General Hospital spoilers say Mike’s condition will continue to rapidly deteriorate. Sonny knew this was inevitable when Mike was diagnosed, but it’s still going to be a blow when it actually happens. He may worry Mike will never recognize him again. Sonny has done his best to reconnect with Mike, but his chance may have come and gone.

Sadly, Mike will be gone too one day – and far sooner than Sonny would like. That’s something Sonny will have to come to grips with after Stella’s updates. Is GH gearing up for Mike’s death arc? It’s probably not something that’ll happen right away, but we’re definitely building toward it based on the latest info.

After all, General Hospital has done about all they can do with this storyline. They’ve played the appropriate beats so far, but this is one they’ll have to play as well. Sonny will eventually lose his father. There’s just no way around that, but it’s sure to be an awful day for the Corinthos clan. You can bet Sonny will dread it, but Carly will try to get him through the ordeal ahead.

Of course, Carly’s keeping a huge secret from Sonny, which involves Jasper “Jax” Jacks (Ingo Rademacher). She’s hiding Nikolas Cassadine’s (Marcus Coloma) survival, so Sonny will be hurt and angry when the truth comes out. How could he not be? Carly is Sonny’s wife, and they’ve been down this secretive road before. It never ends well, so Sonny will feel like the trust between them as shattered.

Could Mike’s eventual death be what brings Sonny and Carly together again? It could remind them of the importance of family and strong bonds. Not much else will matter if Mike’s gone and Sonny’s hurting. It could be Carly’s shot at stepping up and proving she’s still the loving partner Sonny needs.