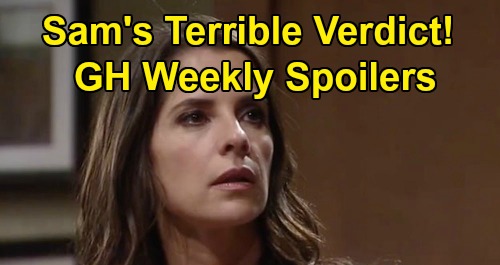 General Hospital (GH) spoilers for the week of November 18-22 tease that some startling revelations are on the way. First, let’s talk about Anna Devane (Finola Hughes). She’ll be floored to learn that Hamilton Finn’s (Michael Easton) child with Hayden Barnes (Rebecca Budig) actually survived. After Anna meets Violet Barnes (Jophielle Love), she’ll need to have a deep discussion with Finn and see where they stand.

Of course, this is something that’ll require more than one conversation. Finn will tell Elizabeth Baldwin (Rebecca Herbst) that he’s got a lot to work through with Anna. Hayden, however, will probably be hoping they can’t work through much at all! She’d definitely like another chance with Finn, so she’ll hold out hope for one in the coming episodes.

Over with Kim Nero (Tamara Braun), she seems poised for more devastation. “Drew Cain” aka Franco Baldwin (Roger Howarth) will make a major decision that will undoubtedly affect his future with Kim. She’ll probably learn they won’t get that future after all, so some tough moments are coming up.

Meanwhile, T.J. Ashford (Tajh Bellow) will pass along a shocking diagnosis. This may be related to Alexis Davis (Nancy Lee Grahn) and her latest health crisis. As for Sam McCall (Kelly Monaco), her bench trial will begin and end just as quickly. Unfortunately, Sam may not like the verdict her judge comes back with.

General Hospital spoilers point to Sam being distraught and fearful. Soon after, Jason Morgan (Steve Burton) will call on Damian Spinelli (Bradford Anderson) for help. It certainly sounds like Sam will be declared guilty, which would force Jason and Spinelli to rev up their takedown efforts. They have to prove Peter August’s (Wes Ramsey) guilt ASAP!

At the Quartermaine mansion, Brook Lynn Ashton (Amanda Setton) will get a warm welcome home. She’ll great her dad, Ned Quartermaine (Wally Kurth), along with Olivia Quartermaine (Lisa LoCicero). The reasons for Brook Lynn’s return home are a mystery, so Ned should find himself a bit suspicious.

Other General Hospital spoilers say Hayden will become Valentin Cassadine’s (James Patrick Stuart) target. A showdown at the pier is brewing, so GH fans won’t want to miss the troubling moments ahead. In the meantime, Jasper “Jax” Jacks (Ingo Rademacher) will put Nina Reeves (Cynthia Watros) on the spot. He’ll demand some answers, so the pressure could lead Nina to spill her true agenda.

Nina will definitely confide something in the week ahead, and it could be that she’s manipulating Valentin for revenge. That definitely seems to be what’s going on, so Jax may support Nina’s plan – if she can stick to it!

Once Nina meets up with Valentin and Charlotte Cassadine (Scarlett Fernandez) again, the plot could become tougher. Valentin’s affection for Charlotte is Nina’s weakness, and he’ll be particularly protective of his daughter thanks to the recent kidnapping chaos. Despite Nina’s confession to Jax, her plans could easily change down the road.