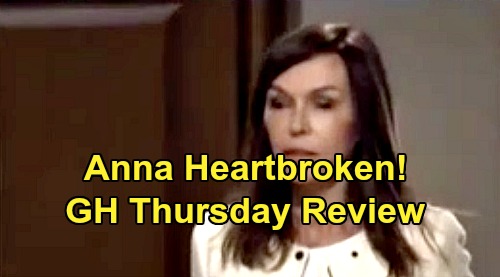 Lulu questioned Charlotte about why she ran off, and Charlotte lied about wanting to go see the launch, then insisted that she go home with Valentin and Nina. Turns out, she wanted to talk with them alone about what Cassandra told her. Charlotte confessed that Cassandra threatened to send Nina to jail unless she complied. Nina thanked Charlotte for trying to protect her, but told her never to do that again.

Later, Lulu and Laura Collins (Genie Francis) showed up at Wyndemere, and Laura took Charlotte off privately to hear about what happened with Cassandra. Charlotte told Laura all about the man she saw on the docks at the time of the explosion – the man that GH viewers know was Nikolas Cassadine (Marcus Coloma). Charlotte told Laura that she didn’t recognize the man, and Laura surmised that it must have been a dock worker.

Of course, there would really be no reason for Charlotte to recognize Nikolas, unless she had recently seen photos of him, which clearly she hasn’t. But the list of people who have seen Nikolas is rapidly growing, and it seems that he’s going to have some difficulty keeping his existence under wraps at the rate he’s going.

Meanwhile, Jasper “Jax” Jacks (Ingo Rademacher) was peeved when Nikolas returned to the house from being out at the docks. They began arguing, when Jordan Ashford (Briana Nicole Henry) dropped by the house. While Nikolas hid, Jordan shared that Cassandra had escaped and the van used as her getaway vehicle was rented with Jax’s company credit card. Jax stated that he had reported the card stolen yesterday, which Jordan thought was huge coincidence.

Finally, Hamilton Finn (Michael Easton) and Hayden Barnes (Rebecca Budig) prepared to tell Violet Barnes (Jophielle Love) that Finn is her father. Hayden had breakfast ordered in from Kelly’s and the three sat down for waffles. It couldn’t have been easier to tell Violet the news. Hayden said that she wanted to tell Violet about her dad, and Finn explained that he and Hayden had loved each other very much and had a baby – Violet.

Violet’s response was enthusiastic, and she wanted to know if that meant that Finn loved her, which he said he did. She also wanted to know if this made Roxie her sister, which they all determined that it did. There were some nice family moments, and Finn and Violet shared a sweet hug. Afterwards, Hayden shared that this was Violet’s best day ever.

Later, Violet was out of the room and Finn and Hayden were sitting in the living room together, with Hayden still wearing one of Finn’s dress shirts. Hayden had just told Finn that she saw him as more than just Violet’s father, when Anna burst in the house, excited and eager to see Finn. Anna stopped and stared when she spied Finn and Anna together in what looked like – and was – a close moment.