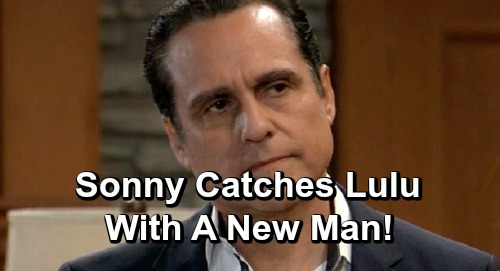 General Hospital (GH) spoilers tease that Sonny Corinthos (Maurice Benard) will make a shocking discovery. He’ll be out and about in Port Charles when he spots Lulu Falconeri (Emme Rylan) on a hot date! Naturally, Sonny will assume Lulu’s getting back in the game. He’ll be upset over this betrayal to Dante Falconeri (Dominic Zamprogna), but things aren’t quite as they seem.

GH fans know Lulu’s simply working on an intriguing story. She’s hoping to catch a guy who scams women by setting up dates and then robbing them. However, Sonny won’t have a clue about any of that. Although Dante encouraged Lulu not to wait for him, Sonny will undoubtedly have a big problem with Lulu’s new man.

On June 13, Sonny will witness Lulu’s flirty encounter with this guy. He may or may not be the culprit Lulu’s looking for, but that part doesn’t really matter. The point is Sonny could strike fear in his heart! Will Sonny waltz over to intimidate she man Lulu was matched with? Will he wait until the date’s over and confront Lulu instead? Regardless, this could lead to a deeper conversation about what Lulu wants.

If Lulu could make her dreams come true, she’d have Dante back where he belongs right now – happy and mentally stable of course. Lulu knows Dante needs help, but that doesn’t make their bed any less lonely at night. She’s once again having to step up with the kids on her own and deal with the solitude once they’re asleep. That has to be taking a toll on Lulu, so she may confide in Sonny.

There’s a chance Sonny will join Maxie Jones’ (Kirsten Storms) mission to help reunite Dante and Lulu. Sonny may feel like it’s time to get some answers and figure out a timetable for Dante’s return. Whatever the case, General Hospital spoilers say Maxie’s plan won’t have the expected result. That tells us Dante and Lulu won’t get their happily ever after – at least not right now.

What would be a surprising outcome here? One might be some miscommunication that leads Dante to believe Lulu is done waiting. He might file for divorce and even finish deprogramming without returning home. Even if Dante heals his mind, he may feel too damaged to go home and resume his old life.

Other option is that Lulu will somehow fall for someone new in the midst of all this. Whether that’s Peter August (Wes Ramsey), Harrison Chase (Josh Swickard) or someone else, that’d be an interesting twist. There’s far too much talk of dating going on, so things have to be headed in a new direction for Lulu.