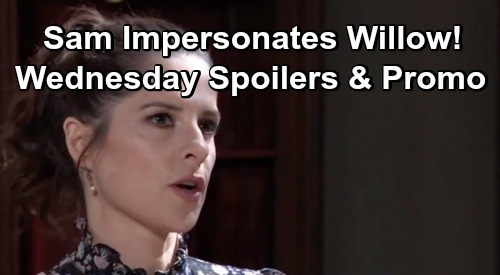 General Hospital (GH) spoilers for Wednesday, June 5, tease that Maxie Jones (Kirsten Storms) will be stuck on her terrible idea. She’s convinced that Dante Falconeri (Dominic Zamprogna) needs to get back home to Lulu Falconeri (Emme Rylan), but there’s a big problem here. Dante was dangerous the last time we saw him. He genuinely needs to be deprogrammed and receive the proper care.

Lulu was adamant that Dante should only come back when he’s ready, but she could be overruled by Maxie on Wednesday. Maxie may push Lulu into a plan to spark a quicker reunion, but Peter August (Wes Ramsey) won’t like this one bit. He’ll warn Lulu about taking Maxie’s advice, but none of them can truly grasp what Dante’s up against.

At Charlie’s Pub, GH spoilers say Brad Cooper (Parry Shen) will pay Julian Jerome (William deVry) a visit. Julian will suggest that Lucas Jones (Ryan Carnes) should be the one to fill Brad in. It looks like Lucas may mention that he’s going to see Willow Tait (Katelyn MacMullen), but Julian may think it’s up to Lucas to share that.

As for Julian, he’ll do something extreme to help Lucas and Brad’s family on Wednesday’s new GH episode, June 5. Julian won’t think anything matters except keeping “Wiley Cooper-Corinthos” with his loving dads. Over with Willow, she’ll tell Lucas that she’s afraid something’s not possible. Lucas will be looking for any strategy to combat this birth father drama, but Willow will gently shut down his suggestion.

At GH, Harmony Miller (Inga Cadranel) will face Shiloh Archer’s (Coby Ryan McLaughlin) fury. He’ll grab her arm from his hospital bed and insist she should tell him she had no part in keeping his child from him. Shiloh won’t hope Harmony didn’t betray him, but General Hospital fans know she did. Harmony was aware of Willow’s pregnancy back when she left DoD, but she chose to keep quiet.

Whether Harmony admits her deception or not, she’ll definitely track Willow down for Shiloh soon enough. General Hospital spoilers state that Harmony will corner Willow and seek some answers. Willow lied about having a miscarriage, but Harmony will know that’s not true. She’ll demand to know where Shiloh’s baby is, but Willow obviously isn’t going to just hand over that information.

Back at Charlie’s Pub, Michael Corinthos (Chad Duell) will sit down for meeting with Harrison Chase (Josh Swickard). He’ll think they should discuss Shiloh and how they’re going to handle this threat. Michael will contend that they need to be willing to do anything to stop him. Chase may agree that when it comes to Willow and “Wiley’s” safety, they have to do whatever it takes.

Other General Hospital spoilers say Sam McCall (Kelly Monaco) will put her con artist skills to good use. Julian asked her to help get rid of the paper trail that could connect the dots. That’s why Sam will pose as Willow and hope she can convince the person in charge that she’s the birth mom. She’ll try to work her magic and cover any tracks that could lead Shiloh to Wiley.

Across town, Sonny Corinthos (Maurice Benard) will speak with Margaux Dawson (Elizabeth Hendrickson). Jason Morgan (Steve Burton) will also be on hand as they try to make her see that Shiloh’s a horrible human being. After Sonny recaps some of Shiloh’s recent behavior, he’ll be met with skepticism from the DA. Sonny will contend that if Margaux doesn’t want to take his word for what happened, take Shiloh’s.

Perhaps Sonny will point out that Shiloh told Sam and Jason Morgan (Steve Burton) where the pledges were. He may argue that Shiloh wouldn’t have given those up unless he was guilty and in a tight spot. Speaking of those pledges, Sonny now has Margaux’s and can force her to play on his team. He’ll do just that, so Shiloh’s arrest is coming up later this week.