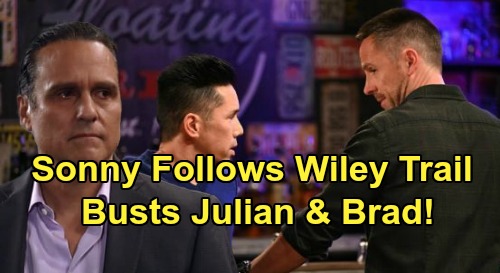 General Hospital (GH) spoilers tease that Sonny Corinthos (Maurice Benard) will soon turn his attention to some other shady Port Charles residents. GH fans know Sonny’s been determined to get to the bottom of Jasper “Jax” Jacks’ (Ingo Rademacher) secret. He even had Gio follow Carly Corinthos (Laura Wright) and report back on what he learned.

However, Carly will spill all the Nikolas Cassadine (Marcus Coloma) details on Thursday, January 2 – at least all the details she’s in the loop on! With that case cracked, Sonny will need to shift gears and focus on an unsolved mystery. Gio eavesdropped on Julian Jerome (William deVry) and Brad Cooper’s (Parry Shen) conversation, which offered just enough info to spark questions and concerns for Sonny.

Of course, Sonny doesn’t know exactly what Julian and Brad are up to, but he must know it can’t be good. It never is when it ties in with Nelle Benson (Chloe Lanier). Her name was brought up in Gio’s recap of the discussion on the pier, so that’s reason enough for Sonny to start digging. Sonny can’t figure out why Julian would care about anything to do with Nelle.

There was also talk of Brad’s kid and Michael Corinthos (Chad Duell), so Sonny’s got some interesting puzzle pieces now. GH viewers realize Julian and Brad’s secret involves “Wiley Cooper-Jones’” real identity, but that’s something Sonny will hopefully figure out in time.

Now that Sonny is aware of Brad and Julian’s deception, he surely won’t let it go. Like Jason Morgan (Steve Burton) pointed out, Sonny feels helpless when it comes to Mike Corbin (Max Gail). Jason suggested Sonny was going overboard on the Jax and Carly stuff because he was desperate to act – and he can’t do that with Mike. There’s nothing that can be done to prevent Mike from fading toward his grim fate.

Fortunately, General Hospital spoilers say Sonny can do something about this Julian and Brad issue. He doesn’t trust either one of them – and nobody should in Port Charles! Sonny may have Gio stay on top of this mystery and see if he can learn more.

Sonny could even have some listening devices planted in spots where he expects Brad and Julian to talk. He’ll need something to keep his mind occupied – and this project is a great fit since he’ll want to protect his family.

Sonny will let Julian know he’s got his number during the week of January 6-10. After Julian’s confronted by Sonny, he could be more careful and make Sonny’s job a bit tougher.

Nevertheless, nothing can stop Sonny when he fears there’s a threat – and Nelle certainly qualifies as a threat. The fact that Brad, Julian and Nelle are all mixed up in this should leave Sonny on a truth mission.

Will Sonny be the first one to start putting the clues together? Will he bring Jason in on this, too? Jason is Sonny’s right-hand man, so it would make sense for him to investigate at some point. Sonny and Jason could play crucial roles in reuniting exposing the truth and reuniting Michael with his son!