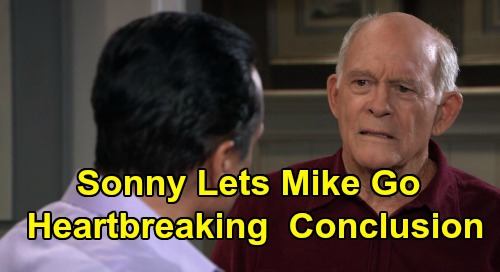 General Hospital (GH) spoilers tease that Sonny Corinthos (Maurice Benard) will have to make an incredibly difficult decision. GH fans know Sonny’s dad, Mike Corbin (Max Gail), has Alzheimer’s and that’s led to some family struggles. Sonny wants to get Mike into a trial that could help his memory – if only temporarily. However, Sonny may be on the verge of a change of heart.

Sonny Wants to Save His Dad

Sonny wants nothing more than extra time with his dad. He understands that Mike’s fading fast and wants to delay his inevitable death. Sonny feels guilty over time he missed with Mike and doesn’t want to let go so soon. General Hospital viewers will recall that Sonny and Mike lost years together due to Mike’s gambling and Sonny’s unwillingness to forgive.

Is Sonny asking for too much? Sonny seems to be looking for a miracle that’s just not going to happen. Even if the trial worked, it wouldn’t be for long. Sonny would be wasting the time he has left to enjoy his father – as Carly Corinthos (Laura Wright) pointed out out. He’d be better off just savoring each moment instead of focusing on a trial that may not provide results.

Gladys Corbin (Bonnie Burroughs) has just given Sonny a shocking dose of reality. She recently lost a friend to Alzheimer’s and it was a very ugly death. Gladys told Sonny how the woman was forced to accept a feeding tube that she didn’t want. Sonny was reminded of how some patients lose their dignity and respect when suffering from Alzheimer’s.

Gladys has painted a disturbing picture for Sonny to consider. Does Sonny want to force Mike into a treatment that might go against his wishes? Is Sonny willing to take the last bit of dignity Mike has left?

What Would Mike Want?

Mike abandoned his family to protect them because of his gambling. He never wanted Sonny involved in his life dealing with loan sharks and all craziness associated with them. Mike had a gambling addiction, but he never expected Sonny to clean up his messes.

Mike wouldn’t want Sonny going to extreme measures to keep him around. He wouldn’t like the idea of being stuck in a bed and forced to have a feeding tube. Mike would want to die with dignity and grace. Will Sonny take this to heart in making decisions about Mike’s care?

Sonny has some tough choices ahead, but Gladys has given him a great deal to think about. Although Sonny already received advice from Sonny and Michael Corinthos (Chad Duell), Gladys brought her own perspective to the table – and it seemed to affect Sonny. Has Gladys convinced Sonny to stop pushing Mike into treatment?

General Hospital spoilers say some somber episodes are ahead once Mike’s story officially winds down. The deadly conclusion will be hard to watch, but it should provide some gripping performances all around. We’ll give you updates as other GH news comes in. Stay tuned to the ABC soap and don’t forget to check CDL often for the latest General Hospital spoilers, updates and news.