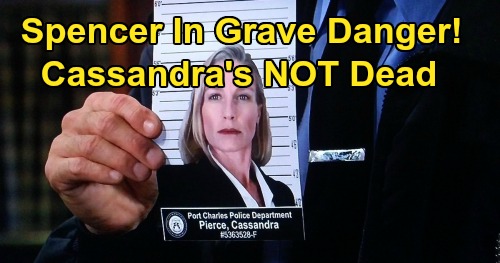 General Hospital (GH) spoilers tease that with Nikolas Cassadine’s (Marcus Coloma) return to Port Charles, Spencer Cassadine (Nikolas Bechtel) can’t be far behind. There’s no word on Spencer’s return just yet, but he’ll have to reunite with his father at some point. Unfortunately, Spencer may land in some trouble. Has Nik put his son in danger by helping Cassandra Pierce (Jessica Tuck)?

Cassandra Isn’t Beyond Going After A Child

GH fans know Cassandra has already kidnapped Charlotte Cassadine (Scarlett Fernandez). Charlotte was safely returned to her parents because of Jason Morgan (Steve Burton) and Anna Devane (Finola Hughes), but it was definitely a dangerous situation.

Cassandra wound up on a boat provided by Valentin Cassadine (James Patrick Stuart). She offered to give the name of the person who helped her escape in return, but Valentin didn’t want to hear it. He just wanted to make sure Cassandra was on the boat so he could blow her up!

A presumed death doesn’t always stick on a soap – as we’ve seen recently with Nikolas. The fact that there’s no body leaves the door open for Cassandra to return. Could Cassandra have cheated death like Nik? Will she target Spencer on one of his impromptu trips to Port Charles?

Spencer never announces his leave from school or anything else; he usually hops a plane and shows up whenever the urge hits him. Will that happen now that Cassandra is missing? Perhaps Cassandra could go after Spencer since deadly Nikolas forced her to flee, which led to the kidnapping fiasco and that boat explosion.

Laura Webber (Genie Frances) doesn’t know Spencer could be in danger from anyone but Valentin Cassadine (James Patrick Stuart). Valentin and Spencer clash constantly over the Cassadine estate. Laura tends to spend the holidays with Spencer, and GH buzz says he could be arriving in Port Charles any day.

Of course, Laura also isn’t aware of Nikolas’ connection to Cassandra. If Laura ends up summoning Spencer, she could put him in danger just by bringing him home. However, Cassandra attacked Sasha Gilmore (Sofia Mattsson) on Sonny Corinthos’ (Maurice Benard) island, so she has a way of finding people and making situations work to her advantage. Cassandra could seek Spencer out on her own or somehow lure him back to PC. The point is Spencer could be on Cassandra’s radar if she survived.

Spencer Has No Idea His Father Is Alive

General Hospital viewers know Spencer has no idea that his father is alive. Nikolas didn’t let Spencer in on his plot this time for fear that he would be hurt. If Spencer is put in danger by Cassandra, will he hold his father’s deception against him? Will Spencer forgive his father for allowing him to believe he was dead for years?

Valentin Would Get the Blame

If anything happens to Spencer, Valentin will be the one who gets the blame. Valentin has threatened Spencer to Laura, so he’d be suspect number one. Nevertheless, Nikolas is the person who was working with Cassandra and unleashed the latest Port Charles mayhem. If Spencer gets hurt through Cassandra’s potential new plan, Nik has no one to blame but himself.

Do you think Cassandra survived and will come back for revenge? Could Cassandra target Spencer and leave Nikolas with even more regrets about their partnership? General Hospital spoilers say some hot drama’s ahead, so don’t miss what’s in store. We’ll give you updates as other GH news comes in. Stay tuned to the ABC soap and don’t forget to check CDL often for the latest General Hospital spoilers, updates and news.