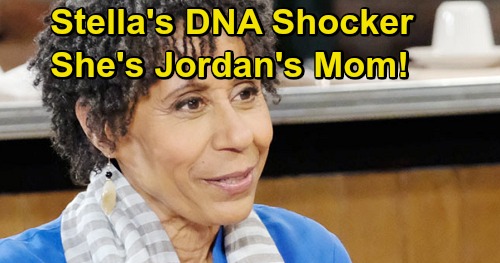 General Hospital (GH) spoilers tease that there could be some unusual circumstances surrounding the results of Stella Henry’s (Vernee Watson) DNA test results she received back from a genealogy site search on a recent episode.

Stella got the idea for the genealogy search from TJ Ashford (Tajh Bellow), who suggested it as a way to look for close relatives of his mother Police Commissioner Jordan Ashford (Briana Nicole Henry) during a search for a donor kidney.

Stella received the results back after the kidney transplant had already been done, but she mentioned it when TJ, her nephew Curtis Ashford (Donnell Turner) and Stella were having a meal together at a Port Charles restaurant.

Curtis brought up the subject a bit later that if Stella has a relative in Port Charles then so would he. This would appear obvious, but apparently that wasn’t the way the writers wrote the storyline.

This could be a hint that Stella and Curtis are not related. This could set up major implications for the Ashford family, but also answer some other questions that GH has not addressed.

Could Stella Henry Have Been Adopted But Didn’t Know It?

Stella could have been adopted, and have never known about it. That might be the reason she didn’t want to pursue finding out about her relative. It was never revealed whether Detective Valerie Spencer’s (Paulina Bugembe) father was dead or alive.

Although the implication would be that he would have at least been as old as her mother Pat Spencer (Dee Wallace). Pat had to have been at least eight to ten years older than Bobbie Spencer (Jackyn Zeman), who is in her early sixties if we go by the actor’s age.

Many General Hospital fans speculated that Pat became involved with Justus Ward (M’fundo Morrison) since she moved to Philadelphia, where the Wards had also lived after Patricia took young Bobbie and Luke Spencer (Anthony Geary) to live with their Aunt Ruby Anderson (Norma Connolly) in Florida.

It is a classic soap opera trope to pair an older woman with a younger one who don’t get along and then reveal them as mother and daughter. General Hospital spoilers have hinted that this is the case with Nina Reeves (Cynthia Watros) and Willow Tait (Katelyn MacMullen).

So when Curtis follows up on the DNA test results because he wants to know who the relative is, will he find out that Stella is really his mother-in-law by blood but his aunt by adoption? Stay tuned to General Hospital and come back to CDL for all the latest General Hospital spoilers, news, and updates!