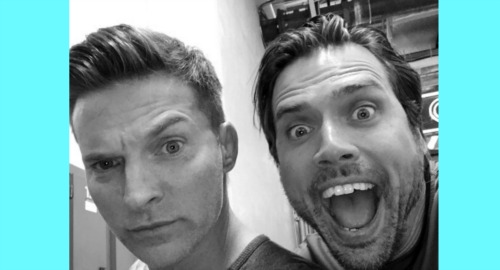 General Hospital (GH) spoilers reveal that one ABC soap star recently gave a special shout-out. Jason Morgan fans are thrilled to have Steve Burton at GH where he belongs, but he also played Dylan McAvoy on The Young and the Restless from 2013-2017. Joshua Morrow (Y&R’s Nick Newman) is his old costar and pal, so Burton sent out some congratulatory words as Morrow celebrated a big milestone.

Morrow has been playing Nick in Genoa City for a whopping 25 years. That’s quite an accomplishment and shows great loyalty to his soap home as well. Morrow has been content to stay and develop his character, which is always nice to see.

Burton reached out to Morrow on Twitter and let him know he was thinking of him. Being on the same show for two and a half decades is an achievement worth tweeting about! Burton gushed, “Happy 25 years to a great guy! @JoshuaMorrowYR A blessing to have been able to work together and to have you as friend for 25 years! Enjoy! #brothers”

Burton’s use of “#brothers” likely has a double meaning. He seems to be indicating that Morrow is like a brother to him, but they technically played brothers on Y&R, too. Dylan’s biological mother, Nikki Newman (Melody Thomas Scott), is also Nick’s mom.

Of course, there ended up being some bad blood since Dylan was unknowingly raising Nick’s stolen baby, who turned out to be Nick’s other brother’s son. Gotta love soaps, right?! Dylan eventually entered the witness protection program, but there’s been some buzz about a possible recast. Burton is sticking around at General Hospital, so Y&R has no hope for the original Dylan’s comeback right now.

Still, it’s great that Burton and Morrow are keeping their offscreen connection alive. Soaps are a tough business, but people often form lasting bonds. Fans love to see pictures and hear stories from costars who became buddies on and off set. Congrats to Morrow and props to Burton for supporting him!

As for what’s next in Port Charles, General Hospital spoilers say Jason will land in some tough jams soon. Are you glad Burton’s firmly in the role of Jason Morgan? What do you hope to see for Jason in the future? We’ll give you updates as other GH news comes in. Stay tuned to the ABC soap and don’t forget to check CDL often for the latest General Hospital spoilers, updates and news.

Happy 25 years to a great guy! @JoshuaMorrowYR A blessing to have been able to work together and to have you as friend for 25 years! Enjoy! #brothers pic.twitter.com/c4Jt4LgEGc