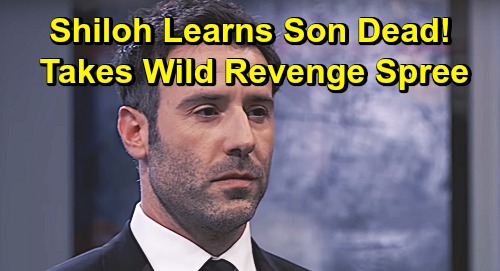 General Hospital (GH) spoilers tease that Shiloh Archer (Coby Ryan McLaughlin) is poised for a major letdown. He believes he has a son, so he’s doing everything he can to fight for him. GH fans know Shiloh has taken some serious hits lately. For starters, he had become obsessed with Sam McCall (Kelly Monaco) and truly thought he’d won her over.

Shiloh’s ego was obviously bruised when he realized Sam never cared about him at all. He prides himself on being able to charm almost anyone, but Sam wasn’t fooled. Since Shiloh doesn’t like powerful women, he’s definitely bitter about how that all went down.

However, Shiloh seems to have put a pin in the Sam and Jason Morgan (Steve Burton) situation. Finding his child is his priority at the moment. Shiloh will soon find out Wiley Cooper-Jones was the baby Willow Tait (Katelyn MacMullen) gave birth to. Of course, that baby died the first night he came home.

Shiloh Has Been Fighting For Nothing

General Hospital spoilers say the rest of the story will have to come out eventually. The fact that this kid is really Jonah Corinthos is a big deal to viewers, but that part isn’t necessary to break Shiloh’s heart – if he even has one under there. Shiloh is sure to be furious when he realizes he’s been fighting for nothing. He’s been neglecting his disciples and missing out on the chance to gain more followers.

The papers are even calling the organization “Dawn of Dead” now. Having high-profile rape accusations thrown at you can do real damage. Shiloh’s cash supply isn’t what it was and now he’s wasting a boatload of money on a high-powered attorney. It’s all for naught since Shiloh’s kid no longer exists.

What will Shiloh do once he knows the truth and doesn’t have a child to pursue? What happens if DoD crumbles as well? Shiloh may be focused on one thing and one thing alone: vengeance. We could see Shiloh go on quite the rampage once he’s got nothing left to lose.

General Hospital spoilers say Shiloh hasn’t forgotten about Sam’s betrayal. She’ll be high on his list of troublemakers who must pay. Could Shiloh try to rape Sam again? Could he order one of his few lingering followers to kill her instead? GH is clearly building to something big here.

Naturally, there’ll be other people Shiloh wants to target. In addition to Sam, Jason will inevitably find himself in danger. Willow, Sonny Corinthos (Maurice Benard) and even Drew Cain (Billy Miller) could be in peril, too. If Drew winds up on the verge of getting his memories back, he’ll pose a serious threat. The rest will be key players that Shiloh will want revenge on.

Those targets could certainly pull in other characters – like Carly Corinthos (Laura Wright) and Kristina Corinthos-Davis (Lexi Ainsworth) through Sonny and Jason. There’d be no better way to hurt them than to bring people they love into it. Brad Cooper (Parry Shen) and Julian Jerome (William deVry) could even face backlash for their part in hiding the truth about Wiley.

General Hospital spoilers say Shiloh will spiral out of control before the summer’s over. When Shiloh learns his son is dead do you anticipate a wild revenge spree? Will this cult leader be dead by fall? We’ll give you updates as other GH news comes in. Stay tuned to the ABC soap and don’t forget to check CDL often for the latest General Hospital spoilers, updates and news.