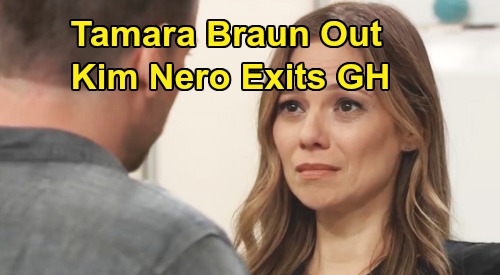 General Hospital (GH) spoilers reveal that one ABC soap star may be on the way out. According to Daytime Confidential, inside sources claim Tamara Braun (Kim Nero) has finished filming and will soon exit GH. They’re hearing that the show has no plans to replace Braun, which isn’t too surprising. Braun’s an incredibly talented actress, but the character has always left a bit to be desired.

Kim debuted as a protective mom to Oscar Nero Quartermaine (Garren Stitt), but GH didn’t flesh her out much beyond that. She was uptight and cagey, which made it hard for many viewers to connect with her. Of course, General Hospital ultimately brought Kim and Drew Cain’s (Billy Miller) old love story into play, but that never really worked without giving the real Drew his memories. It was obvious that storyline was never a priority.

It was later revealed that Kim had been keeping a huge secret from Oscar. GH fans learned Oscar was dying of a brain tumor, so there was some backlash over how Kim chose to handle all that. Braun got some solid scenes in the aftermath of Oscar’s death, but Kim took a turn for the worse. A more traditional depression arc would’ve been better than Kim’s obsession with having Drew’s baby.

Once Kim drugged Drew and planned to force him to sleep with her, she became a lost cause to most people. It was tough to come back from a move that twisted. We have sympathy for Kim as a grieving mom, but most grieving moms don’t inject their exes with something in hopes of conceiving replacement kids. It was taking the whole mourning angle too far.

Now Kim’s convinced that Franco Baldwin (Roger Howarth) is her beloved “Drew” – at least in his head. His DNA says otherwise, but Kim’s acting like Elizabeth Baldwin’s (Rebecca Herbst) the one who’s being outrageous. Kim slept with Liz’s husband! GH has consistently let Kim make poor choice after poor choice.

Franco’s hearing is coming up, so Martin Gray (Michael E. Knight) will fight hard to win the case for both Kim and “Drew.” General Hospital spoilers say a crushing defeat’s looming for Liz, so Martin just may get the job done. However, Franco will inevitably become Franco again eventually. Perhaps he’ll ultimately decide to have the procedure done voluntarily and break Kim’s heart.

Will Kim leave town after Franco reunites with Liz and rejects her? Could she go completely off the rails and land in a mental institution? These are some good options to consider as we get closer to Kim’s potential exit. We’ll give you updates as other GH news emerges. Stay tuned to the ABC soap and don’t forget to check CDL often for the latest General Hospital spoilers, updates and news.