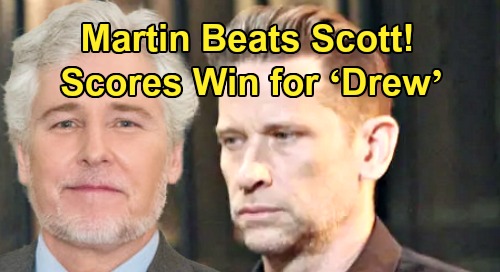 General Hospital (GH) spoilers tease that Cameron Webber (William Lipton) could inadvertently tank Scott Baldwin’s (Kin Shriner) case in the courtroom. GH fans know Cam volunteered to take the stand and talk about Franco Baldwin’s (Roger Howarth) act of heroism. He wants to share the whole story and talk about how Franco promised to come back.

Scott’s eager to use that to his advantage in court. Franco deserves the chance to keep his promise, but he can’t do that without this memory procedure. Unfortunately, Franco isn’t interested since he’s happy living as Drew Cain (Billy Miller). Even so, Scott feels like Cameron’s testimony will score them some serious points.

The problem is Cameron was drugged at the time of the incident. Scott warned that Cameron shouldn’t mention that and vowed that they’d find a way to handle if it came up. That seems like a huge hint about what’s to come in this case. Martin Gray (Michael E. Knight) is a such a hotshot attorney. There’s no doubt that he’ll pick up on this part of the story and run with it.

Martin can discredit Cameron as a witness and argue that his story may not even be true. He can suggest the teen might’ve made up Franco’s promise and undo any progress Scott makes. Furthermore, Martin plans to work a compelling angle. He noted that the topic of identify was a hot one and intends to use that as part of his case.

Scott’s basically going to claim that “Drew” is all in Franco’s head. He’ll push for Franco’s chance to return to his true self. Martin, on the other hand, will suggest that Franco is gone. He’s going to make the case that “Drew” is Franco’s true self now. Martin will hope to win based on the idea that “Drew’s” mind matters more than what body he’s stuck in.

It’s clear that Martin has an authoritative presence about him. Scott comes across as a bit more bumbling, so Martin may crush him to dust! General Hospital spoilers say Liz will suffer a crushing defeat during the week of October 21-25. Does that mean Martin will win, leaving Franco and Kim Nero (Tamara Braun) overjoyed? It looks like it based on the information that’s out there right now.

Of course, this could actually be a good thing. Franco may have the chance to warm up to Liz and make the decision to have the memory procedure for himself. That’d take the burden of guilt off Liz if something were to go wrong.