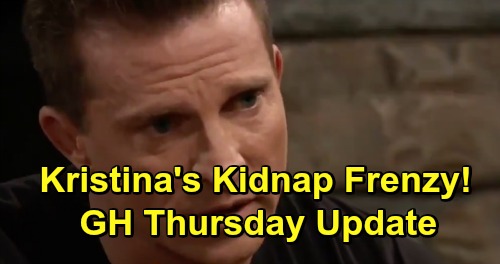 General Hospital (GH) spoilers for Thursday, April 11, tease that Carly Corinthos (Laura Wright) will get choked up over fading Oscar Nero (Garren Stitt). At GH, she’ll hate that Oscar’s dying and Josslyn Jacks (Eden McCoy) is in so much pain. Sonny Corinthos (Maurice Benard) will console Carly, but she’ll worry that Oscar might never wake up.

Joss just wants to tell Oscar she loves him once more, so the thought of him staying comatose is devastating. She’ll plead with Oscar by his bedside and hope for a mini miracle. Josslyn isn’t asking for some incredible cure here. She just wants to look in Oscar’s eyes again and let him know how much he means to her.

Drew Cain (Billy Miller) and Dr. Kim Nero (Tamara Braun) will meet with Oscar’s medical team on Thursday. Dr. Terry Randolph (Cassandra James) will confess that there’s really nothing more they can do for Oscar. They can’t force him out of his coma or bring on any improvements.

Dr. Monica Quartermaine (Leslie Charleson) will agree that they have to prepare for the difficult next steps. She’ll try to inch Oscar’s parents toward letting him go, but good news is coming. General Hospital spoilers say Oscar will indeed emerge from his coma. He’s still marching toward his inevitable death, but it’s great that he’s going to have some farewell episodes.

In the meantime, Molly Lansing-Davis (Haley Pullos) will feel like Sam McCall (Kelly Monaco) has truly lost it. She’ll insist that Sam’s out of her mind as she confronts her sister next to Shiloh Archer (Coby Ryan McLaughlin). Molly will assume Sam’s buying what Shiloh’s selling, but Sam’s still scheming. She’s trying to free Kristina Corinthos-Davis (Lexi Ainsworth) from this cult once and for all.

Molly won’t get anywhere with Alexis Davis (Nancy Lee Grahn) either. Alexis is in the loop on Sonny and Jason’s kidnapping plot, but she won’t let Molly know what just went down. As for Kristina, she’ll awaken disoriented and curious about what happened. Jason will explain that Kristina was apparently drugged by Shiloh. He’ll contend that he had to get Kristina out of there before it was too late.

Once the drugs wear off enough for Kristina to be coherent, she’ll surely lash out at Jason. Kristina adores Shiloh and everything he stands for, so she should be angry that Jason thwarted her entrance to “The Trust.” Dr. Neil Byrne (Joe Flanigan) will begin Kristina’s exit therapy soon, but she’ll likely be one of his toughest patients.

Elsewhere, Michael Corinthos (Chad Duell) will ask for some favors. He’ll pass along some new info to Harrison Chase (Josh Swickard) and count on the detective to investigate. Michael will need Willow Tait (Katelyn MacMullen) to come through for him, too. He’ll urge Willow to have a conversation with Kristina and share the horrible truth about Dawn of Day.

Michael will want Krissy to hear Willow’s perspective and hopefully turn her back on the community. However, General Hospital spoilers say Willow may offer a warning. It was incredibly hard for her to see the light when she was in DoD. Willow might argue that her point of view isn’t going to matter since Kristina is still so deeply devoted to Shiloh.

Nevertheless, Willow may promise to try. It couldn’t hurt, so Willow might as well tell her tale and hope it sinks in eventually. We’ll give you updates as other GH details emerge. Stick with the ABC soap and don’t forget to check CDL often for the latest General Hospital spoilers, updates and news.