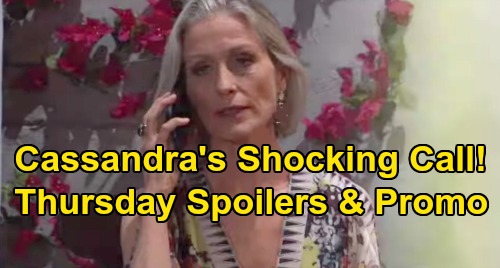 General Hospital (GH) spoilers for Thursday, August 1, tease that Laura Webber (Genie Francis) will try to be there for her daughter. Lulu Falconeri (Emme Rylan) is struggling to cope with the end of her marriage and the realization that Dante Falconeri (Dominic Zamprogna) may never come back to her. She’ll be an emotional wreck as she opens up and even lashes out at Laura a bit.

Of course, Laura won’t blame Lulu for having a hard time. She’ll just offer some comfort and do her best to help Lulu through this. In the Metro Court elevator, Neil Byrne (Joe Flanigan) will remain stuck with Alexis Davis (Nancy Lee Grahn). He’ll admit he has somewhere to be – and it looks like it involves his deceased daughter, Joanna. Neil may hope to honor Joanna’s memory in some way.

Alexis will lend an ear, so Neil will finally let his walls down. It’ll bring them closer, so expect a near kiss in Thursday’s GH episode. Naturally, the elevator should get up and running again just before their lips meet!

Over with Hayden Barnes (Rebecca Budig), she’ll catch her breath over a scare at Wyndemere. Based on the grin she’ll be sporting, it probably won’t be Liesl Obrecht (Kathleen Gati) unless Hayden’s just that overcome with relief. Charlotte Cassadine (Scarlett Fernandez) might be a better option since she’s around somewhere as well.

Meanwhile, Nina Reeves (Cynthia Watros) will pump Jasper “Jax” Jacks (Ingo Rademacher) for info. Of course, Valentin lost control of that truth serum, so no one knows who ended up with the unlucky glass. Nina will seem a little tipsy, but that may be a ploy. General Hospital spoilers say Nina will catch onto Valentin Cassadine’s (James Patrick Stuart) idea, so that may be part of the plan.

Later, Hayden will make a total fool of herself, which could mean she’s the one who actually received the truth serum. That could be dangerous since she’s keeping some huge secrets – like her mission to take down Valentin with Jax and that kid Hamilton Finn (Michael Easton) doesn’t know about!

Next, Cassandra Pierce (Jessica Tuck) will step away from Michael Corinthos (Chad Duell) and Sasha Gilmore (Sofia Mattsson) to make a call. She’ll tell the person on the other end not to speak and advise him or her to listen instead. Cassandra will be eager to pass along some urgent instructions to her helper, so it’ll be interesting to see what she demands.

Back with Sasha, she’ll think Michael’s different from most guys. Sasha will praise some quality of Michael’s that she finds desirable, but he’ll seem a bit uncertain. Perhaps Michael will be too modest to agree or will view Sasha’s take as something negative instead.

In Port Charles, Carly Corinthos (Laura Wright) will phone someone about a new problem. Sonny Corinthos (Maurice Benard) will chuckle by Carly’s side, so it doesn’t sound like it’ll be anything too catastrophic. This will be a mostly comical crisis, but Carly will still have to handle it on Thursday.