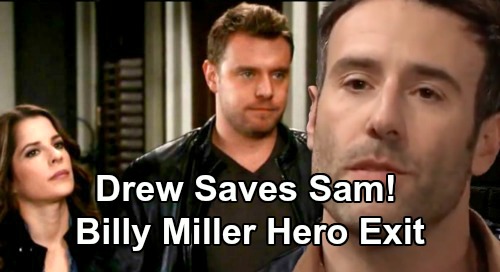 General Hospital (GH) spoilers tease that Drew Cain (Billy Miller) could be building toward a hero’s exit. There’s no official word on whether the role will be recast, but we know Miller has already taped his final scenes. Whether someone new takes over the part or not, Miller’s Drew may go out on a high note.

Shiloh Archer (Coby Ryan McLaughlin) is flat broke right now, so he’s eager to get hands on the money from Afghanistan. Since Shiloh believes Drew’s memories are the only way to pull off his plan, he got his minion to swipe the flash drive and hand it over. The next phase of this plot will involve kidnapping Sam McCall (Kelly Monaco) and luring Jason Morgan (Steve Burton) to a motel to save her.

Shiloh will hope to implant Drew’s memories in Jason’s brain, but what about Jason’s previous brain injury? It doesn’t look like Jason will be a suitable memory-mapping candidate, but Drew obviously is. Will he be the only one who can come to Sam’s rescue? Jason is usually the only one allowed to play the hero, but GH may make an exception for Miller’s exciting exit arc as Drew.

It was a strange decision not to pursue much of a love triangle after Jason’s return. Sam could’ve been torn between Drew and Jason for quite some time, but it wasn’t long until things fizzled with Drew. Since then, Sam and Drew have barely had any scenes together. It’s like General Hospital erased their connection, so this could give “Dream” fans a little parting gift before Miller goes.

Will Drew volunteer to have the memory procedure and tell Shiloh what he wants to know? Shiloh isn’t eager for anyone to find out about his treason, but desperate times call for desperate measures. He’ll be willing to demand this memory-mapping strategy due to money it could lead to. Shiloh may force Drew into the procedure, which GH viewers know is risky since Drew could lose memories his kids.

Of course, that could set up Drew’s departure. It’s possible Drew will manage to keep his new memories while regaining the old ones. He may be interested in looking into his past once he knows more about it, which could take him offscreen. If Drew forgets his recent memories, perhaps he could be sent off to a specialist somewhere who might help him – at least until a recast could come on the scene.

It’s also possible Drew won’t awaken from this potential procedure. A coma is always a classic excuse to explain a soap character’s absence. Regardless, General Hospital spoilers say Drew and Shiloh have even more conflict ahead. This is all coming to a head, so it’d be interesting to see Drew step up when it counted and rescue Sam from Shiloh’s clutches.

Are you curious about Drew’s exit and what’s in store for him? Do you hope Drew gets to play the hero? We’ll give you updates as other GH news comes in. Stay tuned to the ABC soap and don’t forget to check CDL often for the latest General Hospital spoilers, updates and news.